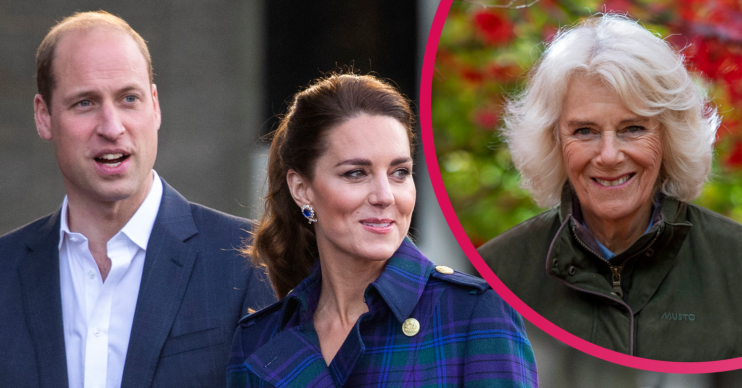 The Queen also sent her regards to her daughter-in-law

Prince William and wife Kate have wished Camilla, Duchess of Cornwall a very happy birthday with not one but two messages of congratulations.

What did William and Kate say in their messages?

Taking to Twitter, Will and Kate posted a picture of a smiling Camilla wearing an off-white dress.

They captioned the shot: “Wishing The Duchess of Cornwall a very happy birthday today!”

Read more: William and Kate to ‘keep George out of the limelight’ after Wembley abuse

Over on Instagram, they added a picture of Camilla in a navy and cream spotted dress with coordinating navy jacket.

They posted the same message and tagged her Clarence House account.

Alongside a smiling picture, the posts directed fans to the monarch’s daughter-in-law’s page on the royal family website, where royal watchers could get more details about the duchess’s life and work.

What did royal fans say about Camilla’s birthday?

Posting on William and Kate’s social media, many joined in and also wished Camilla a happy birthday.

One said: “Happy birthday Camilla. Have the best of days.”

Read more: Prince William was ‘taking no nonsense’ from Harry and Meghan ‘early on’

Another added: “She’s the best of the whole bunch. Happy birthday Duchess of Cornwall Camilla.”

A third said: “Happy Birthday to The Duchess of Cornwall! Love her always and may she have a great year ahead of her.”

Others posted birthday gifs of cakes, balloons and champagne.

No new picture of Prince George from William and Kate for his birthday?

In other royal birthday news, one royal expert has revealed that they think the Duke and Duchess of Cambridge won’t release a picture of son Prince George to celebrate his upcoming eighth birthday.

George turns eight on July 22 and traditionally his parents release new pictures of their son to mark the day.

However, royal expert Angela Levin has said the couple could break from tradition after the backlash George faced for not wearing an England shirt to the Euro 2020 matches he attended.

She said: “There are rumours that we might not see the photograph [of Prince George] when he’s eight, because they’ve been so upset by the rudeness of people mocking a little boy aged seven.”