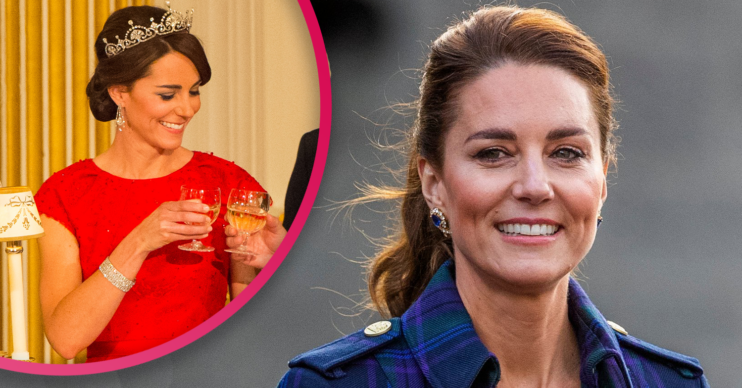 Will Kate Middleton ever be Queen? 5 times she proved she’d be perfect for the role

She'll definitely get a title change when William ascends the throne…

Kate Middleton will one day sit on the throne alongside husband Prince William when he becomes king.

But will she automatically become queen?

It is likely that she will become Queen Catherine when Prince William ascends the throne.

However, she won’t be a queen in the same sense that the current monarch is.

This is because Kate would be married to a king, rather than reigning in her own right.

Read more: Are Kate and William banned from holding hands when they’re out in public?

It’s thought that when he becomes the King of England, Kate will become Queen Consort.

This is something many royal wives have done in the past. And it’s something the Duchess of Cornwall will do too when Prince Charles becomes king.

There are three types of queen – consort (married to a king), regnant (reigning in her own right) or a dowager (mother of the reigning monarch).

Royal expert Marlene Koenig explained: “Catherine’s role will certainly change as she will be the consort of the sovereign.

“There is no real constitutional role for a consort, just by tradition.

“She will be the first lady of the land, in terms of precedence.”

When William and Kate become King William and Queen Catherine, their eldest child Prince George will become the Prince of Wales.

Why Kate is perfect for the role of Queen Consort

Unlike others who have gone before her, Kate will be a “commoner” queen and thus able to relate to her subjects more closely than other consorts.

Although she lives a life of tiaras and glitzy balls now, Kate was born into a normal family and has been credited with helping to make the royal family more relatable than ever before.

This has been seen in her warm manner, evident when she’s out on royal engagements and interacting with members of the public.

She’s had the perfect teacher

As a result, she’s had the perfect teacher to learn the role from.

“Kate strikes that balance between bowing to her as head of the royal family in public but being able to check in with her as the great-grandmother to her children,” he said.

Duncan added: “Kate has her own direct line to speak to the Queen and she calls her to check in on her and give her updates on the children.

“She always leans on her for advice. It’s believed Kate was the one to teach the Queen how to use Zoom and that’s been lovely, so she can see her great-grandkids and stay connected.”

Making sacrifices for her role as a royal

One significant sacrifice that comes with being a royal is privacy.

As the future queen consort, the Duchess of Cambridge allows the public to share intimate moments and milestones that most people would usually reserve for family.

For example, she posed for photographers on the Lindo Wing steps just hours after giving birth to Prince George in 2013, Princess Charlotte in 2015, and Prince Louis in 2018.

However, that’s not to say she didn’t find the experience “slightly terrifying”.

Speaking on the Happy Mum, Happy Baby podcast, she said: “Both William and I were conscious that this was something that everyone was excited about.

“We are hugely grateful for the support that the public has shown us, and actually for us to share that joy and appreciation with the public was equally important.”

She’s not shy of working hard for the family

Kate has most definitely stepped up since Prince Harry and Meghan Markle stepped down as senior royals.

A royal source told People: “If she needs to step up to the plate, she does it – and she always has.

“If that means juggling an increased workload, consider it handled.

“She is an adoring mother, and she is contributing publicly in the way we would want her to. You see it more and more. The young student has turned into our future queen.”

The style evolution of Kate Middleton

The duchess’s changing style over the years also shows she’s preparing for her future role as Queen Consort.

He said: “Whether that was because she wanted to prove herself to the royal family or was her own personal style, who knows. But she was rarely seen in anything too risqué.

“However, since marrying Prince William and officially becoming a member of the royal family, her outfits have certainly become more modest.

“She had to leave behind the flirty and floaty dress, thigh-skimming minis and low-cut evening gowns. Instead, she introduced skirt suits and coat dresses. These have since become her go-to looks for public engagements.”

He concluded: “Slowly, but surely, she has finessed her style over the years. Her style is without a doubt suitable for a future queen.”

Head to our Facebook page @EntertainmentDailyFix and tell us what you think of Kate’s suitability to her future role.