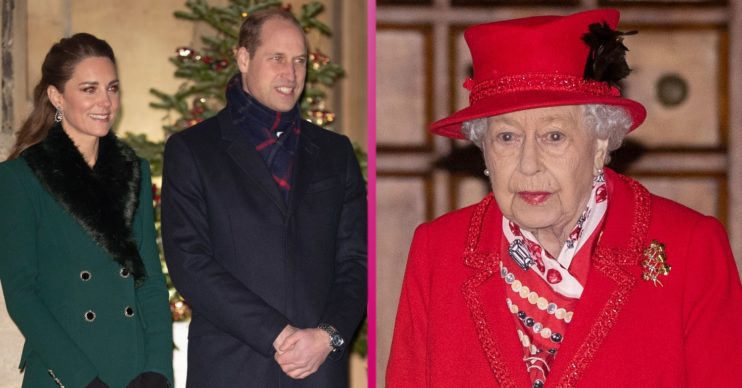 Why was Prince Philip missing from royal family photocall with the Queen, Prince William and Kate Middleton?

Fans were delighted to see the royal family reunited yesterday, but many also wondered: why was Prince Philip missing from the photocall?

They had been on a three-day train tour across Scotland, Wales and England to thank essential workers for recent efforts.

However, critics questioned why the royals were travelling so much during the pandemic. It was asked whether their journeys may be a breach of cross-border travel restrictions.

But the couple were all smiles yesterday as they assembled alongside the Queen, Prince Charles and the Duchess of Cornwall.

Princess Anne, Prince Edward and the Countess of Wessex were also in attendance for the royal reunion.

The family assembled on the steps of Windsor Castle for the socially-distanced event as a Salvation Army band played carols.

However, many social media users were perplexed as to why 99-year-old Prince Phillip was not with them.

“Where’s Prince Phillip? Why’s he not there?” asked one Twitter user.

Another tweeted: “Pity not to see Prince Philip; I’m sure he would have liked to have seen the band.”

“Prince Phillip should be there with his family,” insisted another observer.

And a fourth person remarked: “Such a shame Prince Phillip couldn’t join his family.”

Why was Prince Phillip missing from royal family photocall?

However, it seems Prince Philip was not in attendance because he retired from royal duties in May 2017.

The Duke of Edinburgh has stepped back from public duties and therefore did not attend.

A representative for Buckingham Palace told ED: “The Duke of Edinburgh has stepped back from public duties and therefore did not attend.”

How will the Queen and Prince Phillip spend Christmas?

For the first time in over three decades, the Queen and Prince Phillip will not be spending Christmas at Sandringham.

Buckingham Palace confirmed they will spend their festive break at Windsor Castle instead.

It was confirmed in a statement: “Having considered all the appropriate advice, the Queen and The Duke of Edinburgh have decided that this year they will spend Christmas quietly in Windsor.”