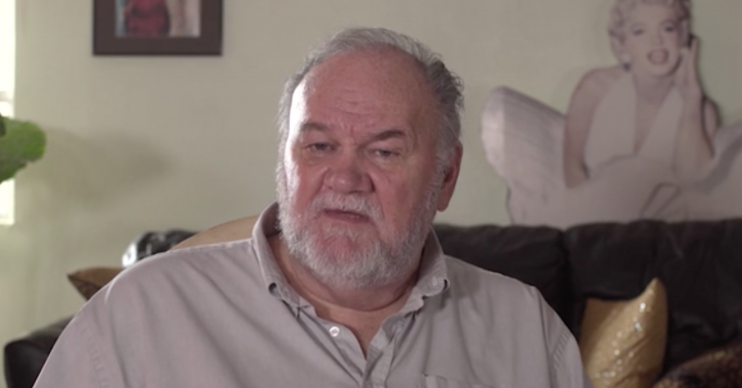 Many thought he was a sweet, humble man

Calling Thomas a “sweet, humble man”, Channel 5 viewers took to Twitter in their droves to reveal they were “Team Thomas”.

One even commented that it seemed like he was a “decent dad” to Meghan.

In the documentary, Thomas Markle: My Story, Thomas revealed how his relationship with his daughter has broken down to the extent that he now fears the next time she sees him will be at his funeral.

After being advised not to fly following heart surgery, Thomas missed Meghan’s wedding and he revealed that he “cried” as he watched it on television from a “safe house” following his release from hospital.

I love him! What a sweet, humble man. What the hell happened to Meghan to treat him so appallingly.

Meghan and Harry haven’t spoken to Thomas since and many said the documentary made uncomfortable viewing as you could see how much Thomas loves his daughter.

Read more: Chase star mocked after boasting £26k is “not much money”

Thomas said: “To them I don’t exist and now Harry, whether he realises it or not, is part of my family and I’m part of his. We should be talking.”

Bless #thomasmarkle, so sad watching this. Clearly he loves her very much.

I love him! What a sweet, humble man. What the hell happened 2 Meghan 2 treat him so appallingly.

TEAM Thomas all the way 💕

I’ve shed a tear in genuine compassion 4 him

#ThomasMarkle seems like he was a really decent dad to Meghan. It’s so sad that now she’s married into a prestigious family she doesn’t want anything to do with him. It’s not like he wasn’t there for her when she was growing up. He was in your life #MeghanMarkel Reach out to him!

#ThomasMarkle sorry, but I think he’s a genuine guy, that misses his daughter! If anything bad was done, it wasn’t his intentions, he was made to do it ! My opinion

Whilst uncomfortable watching personal home videos, it’s clear Thomas Markle loves his daughter. And she loved him, until he didn’t fit the image she was trying to portray. It makes for a sad story. #ThomasMarkle

Others said they thought Thomas had “every right” to share his story and that Meghan should have treated her dad with “more resect”.

#Thomasmarkle has every right to tell his story. The guy has been slaughtered across the news and social media for two years.

I’m really liking Thomas Markle and don’t see why people feel the need to attack him constantly!! He’s a father and why shouldn’t he do this docu on his daughter, she’s not treated him with much respect either! #Thomasmarkle #ThomasMarkleMyStory @channel5_tv #channel5

However, not everyone was on Thomas’s side.

Some hit out at the fact that Thomas has sold his story and taken part in numerous photo opportunities off the back of his daughter’s fame.

Not watching the #ThomasMarkle interview cos parents who love their kids don’t sell them out via national television. What a massive intrusion for your parent to be that much of a 💩 that they’d paint themselves as a victim when they’re off selling stories of you to the press.

“I’ll continue to do future things & get paid for it. Harry owes me. Meghan owes me. She promised to look after me in my senior years, I’m 75 & I deserve to get paid “.
That statement alone tells us what kind of ‘father’ he is 😠#ThomasMarkle

Actually mortified there’s people on the #ThomasMarkle hashtag taking his side or feeling sorry for him because of yet another completely orchestrated tv interview. What the hell is wrong with any of you that you think anything he’s done is okay? Embarrassing

The documentary aired after Meghan’s mother Doria Ragland told friends that her daughter “is strong and will always be okay”.

Head to our Facebook page @EntertainmentDailyFix and let us know what you thought of the documentary.