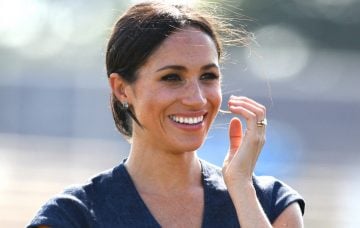 The Duchess' dad is happy for the Royal couple

They may have a strained relationship, but The Duchess of Sussex’s dad is still delighted by the prospect of becoming a grandpa.

The retired Hollywood lighting director has broken his silence to call the royal baby news “a blessing”.

Speaking to the Mail on Sunday, Thomas, 74, said he found out The Duke and Duchess of Sussex were expecting their first child via a radio report while he was in his car.

He says: “I thought, ‘My baby is having a baby.’ It was a very proud moment. I was filled with love, joy and happiness for both my beautiful daughter and my son-in-law. A new baby is a blessing and I look forward to seeing a little Meghan or a little Harry.”

A spokesperson said: “The Queen, Duke of Edinburgh, Prince of Wales, Duchess of Cornwall, and Duke and Duchess of Cambridge are delighted for the couple.

“Ms Doria Ragland is very happy about the lovely news and she looks forward to welcoming her first grandchild.”

Thomas – who retired to Mexico six years ago – added that he wasn’t surprised by the news, saying: “I’m delighted for them both. She’s always been wonderful with children and most of her friends have families so she’s used to being around kids. She will make a fantastic mother.”

He finished by saying: “I love my daughter and always will. She will be a great mum. I wish her and Harry nothing but the best.”

Meghan’s mother, Doria, was named in the official statement from Kensington Palace confirming the baby news, but there was no mention of Thomas.

He was not paid for his interview with Mail on Sunday and spoke of Meghan and Harry only in positive terms.

Read more: Duke and Duchess of Sussex share touching moment in the rain

Thomas – along with Meghan’s half-sister Samantha – are estranged from the Duchess of Sussex, who is currently on a 16-day tour with Harry, 34, of Australia, New Zealand, Tonga and Fiji.

They fell out in May, when Thomas collaborated on set-up photos, showing him Googling his 37-year-old daughter and being fitted for a wedding suit.

He later apologised publicly, but was unable to walk Meghan down the aisle after suffering two heart attacks.

Since then, Thomas has given several interviews about his Suits actress daughter, including a chat on Good Morning Britain, where he revealed a private conversation with Prince Harry.

He previously claimed that his efforts to apologise to the Royal Family for his gaffes had been rebuffed, and that he didn’t know how they expected him to behave.

What do you think of Thomas giving another interview? Leave us a comment on our Facebook page @EntertainmentDailyFix and let us know what you think.