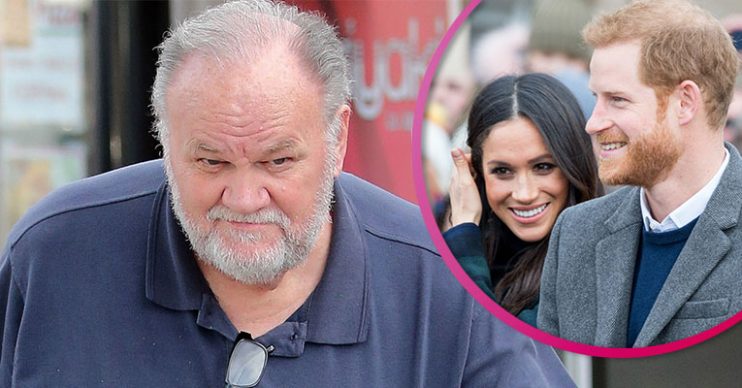 The couple are stepping away from the royal family

The 75-year-old retired lighting director – who has been estranged from the former actress since her marriage to Harry in May 2018 – is very “upset” with the couple following their public statement which appeared to take a swipe at the prince’s grandmother and the royal family when they confirmed they would not be using Sussex Royal in their branding.

Thomas told TMZ: “I’m very upset with Meghan and Harry right now. I don’t think they have the right to use the word Royal.

Read more: Meghan and Harry ‘will rake in £1billion once they split from royal family,’ expert claims

“I don’t think they have a right to speak to the Queen in the way they have spoken to her, I think it’s an insult to the Queen and to the British people.”

And Thomas claimed his daughter – whose mother, Doria Ragland, was her only relative in attendance at her wedding – had a history of “dumping” those around her.

I think it’s an insult to the Queen and to the British people.

Thomas spoke out a few days after the couple – who have nine-month-old son Archie together – released a statement confirming they wouldn’t be using ‘Royal’ in their branding.

They said: “As The Duke and Duchess will no longer be considered full-time working Members of The Royal Family, it was agreed that use of the word ‘Royal’ would need to be reviewed as it pertains to organisations associated with them in this new regard…

They also claimed their new position was under “review”, while other members of the royal family had been allowed to work without conditions being imposed.

They said: “The preference of The Duke and Duchess of Sussex was to continue to represent and support Her Majesty The Queen albeit in a more limited capacity, while not drawing on the Sovereign Grant.

“While there is precedent for other titled members of the Royal Family to seek employment outside of the institution, for The Duke and Duchess of Sussex, a 12-month review period has been put in place.

“Per the agreement The Duke and Duchess of Sussex understand that they are required to step back from Royal duties and not undertake representative duties on behalf of Her Majesty The Queen.”