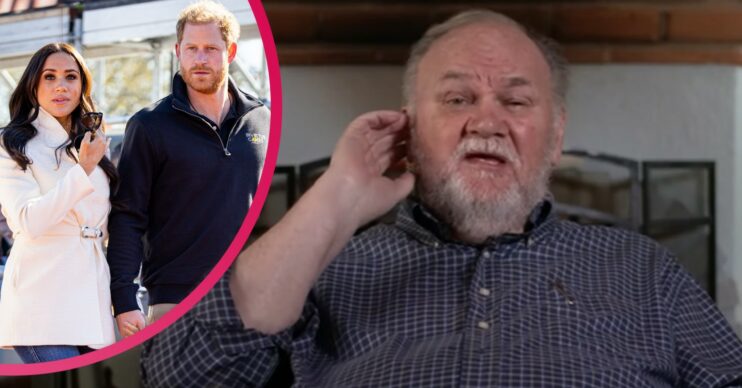 He's reaching out to the Royal Family...

Thomas Markle has made an announcement which could “rock” his estranged daughter Meghan Markle and Prince Harry.

Thomas has had a strained relationship with Meghan since she married into the Royal Family.

He previously begged the couple to let him see his grandchildren, their son Archie, two, and daughter Lilibet, 10 months.

Now, Thomas has revealed he’s planning on coming to the UK for the Queen‘s Platinum Jubilee to meet the Royal Family.

Thomas appeared on GB News’ Dan Wootton Tonight on Monday to reveal he’ll be flying from his home in Mexico to London in June.

Her Majesty’s Platinum Jubilee celebrations will take place in June to mark her 70 years on the throne.

Thomas is hoping his gesture will help him reunite with Meghan as well as meeting Harry and his grandchildren.

“We admire them and we want them to know that’s how we feel about them.”

When asked whether he would like to meet with Prince Charles, Thomas said: “I really would and thank him for walking my daughter down the aisle.

“I think we have a lot in common now. We’ve both been ghosted by our children.”

He was then asked whether he’d like to meet with Prince Harry and Meghan during his UK visit.

Thomas said: “Interesting question. I’m getting the feeling that if they know I’m coming, they won’t be coming.

“But if they do come I would love to reach out and speak with them and try and figure out what went wrong and how we can repair it.

“I don’t see that happening but I would like to try.”

Harry previously said “security issues” will determine whether he and Meghan return to the UK for the Jubilee.

Thomas said of Harry’s comments: “I think it’s ridiculous, he knows how much security they’re going to have.

“I have so little respect for that man, I think he’s an idiot.”

Thomas also said he thinks Harry and Meghan not bringing their children to visit the Queen earlier this month was a “slap in the face”.