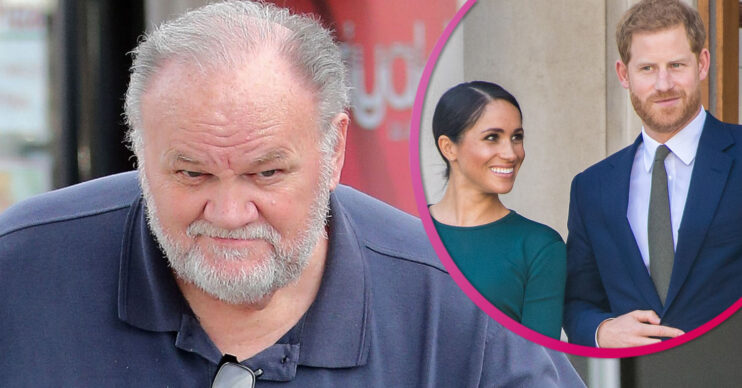 Thomas opened up about being 'ghosted' by the couple

Thomas Markle has sat down with 60 Minutes Australia for an explosive interview.

The father of Meghan Markle made a string of comments about his daughter and her husband Prince Harry, saying he wants to reconcile.

Thomas even took aim at Oprah Winfrey – who interviewed the Duke and Duchess earlier this year – and accused her of “playing” the couple.

Here we take a look at Thomas’ most explosive comments from the chat.

The 76-year-old said: “I think Oprah Winfrey is playing Harry and Meghan.

Read more: Thomas Markle admits he’ll be ‘disappointed’ if he doesn’t get to hold granddaughter Lilibet

“I think she is using them to build her network and build her new shows and I think she’s taken advantage of a very weakened man and getting him to say things that you just shouldn’t be saying on television.

“She will disagree of course, and she may even sue me, I don’t care. But the bottom line is she is working Harry.”

Thomas begs to see his grandchildren

In another part of the interview, Thomas expressed his sadness over not seeing his grandchildren Archie, two, and newborn Lilibet – who was born on June 4.

“I might never see my grandchildren. I’m not looking for pity. I’m just saying that’s a reality.

“All I can say is that I hope eventually I get to see these grandchildren of mine. I’m a pretty good grandpa.”

Thomas says there’s ‘no compassion’ for him

Meanwhile, Thomas opened up about not seeing his daughter and her family.

He hasn’t spoken to Meghan since she married Prince Harry in 2018 after pulling out of her wedding due to heart surgery.

Thomas said to 60 Minutes: “Of course it hurts, there are axe murderers in prison and their family comes to see them.

“I’m not an axe murder. I made one dumb mistake and I’ve never been forgiven for it,” seemingly referring to the staged paparazzi photos he took part in ahead of the wedding.

Thomas accuses Meghan and Harry of being ‘cold’

Elsewhere, Thomas opened up about the paparazzi photos controversy.

Before the wedding, he was seen photographed in a variety of situations which later were revealed to have been staged.

Thomas said: “I’ve apologised a hundred times for it.

“I’m not bitter, I’m confused. I just don’t have the answer. I want an answer. If I had done something terribly wrong that would be fine but I haven’t. I just want an answer.

“I don’t know if anybody that’s that cold to do this and now Meghan’s did it to me and Harry’s doing it to his father.

“That’s a cold thing to do and it’s even more cold to do it to the Queen, who is in her nineties.”

Meanwhile, the former lighting director claimed he heard about Harry and Meghan’s second child’s birth on the radio.

He said: “No phone calls, I just heard it on the radio. I haven’t spoken to [Meghan] since two days before they got married.”