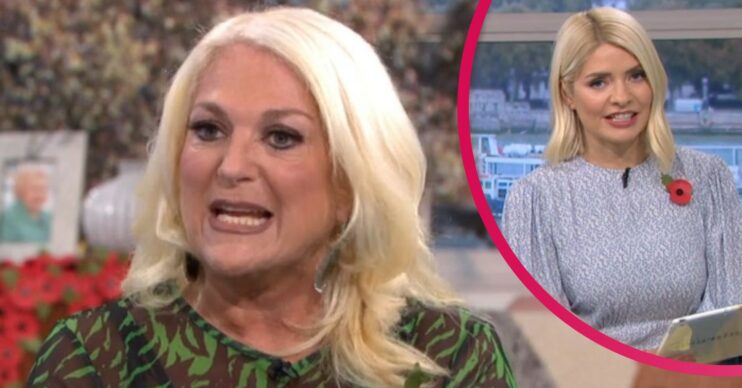 This Morning criticise show over Meghan and Harry coverage

The royal couple have made headlines again

On This Morning today, viewers hit out at the show for having more debates about Prince Harry and Meghan Markle.

The Duke and Duchess of Sussex have made headlines again for a series of reasons, mainly due to Meghan apologising for ‘misleading’ the High Court about her involvement in the Finding Freedom biography.

On Thursday’s This Morning, Vanessa Feltz and Camilla Tominey appeared on the programme and shared their thoughts on the couple.

During the This Morning’s View segment, Vanessa reacted to the Duchess of Sussex’s apology.

In a witness statement, Meghan said she “had not remembered” that she had approved her and Harry’s former communications secretary to brief the book authors.

Vanessa said: “It’s absolutely riveting stuff. It’s actual documentary evidence of emails sent by Meghan and Harry to their communications officer in order to portray themselves in a particular way, in a flattering light, in a way that they have orchestrated, in a way that they want people to perceive them.

What did Vanessa say?

“Now that, I think many people will interpret, is incredibly manipulative.

“And I wrote down just one sentence that Prince Harry emailed Jason Knauf because I don’t think that it fits at all with the way that we thought Prince Harry operated as a human being.”

The email in question from Harry to Knauf allegedly said: “I totally agree that we have to be able to say we didn’t have anything to do with it.”

She added: “That’s not the Harry that we loved and knew is it?”

However, viewers took issue with the show for hosting more debates about the royal couple.

One person said on Twitter: “@thismorning stop the obsession with Meghan and Harry. Who cares? Have you taken a look at the world lately?”

“At least Meghan owns her mistake knowing public backlash against her.”

However others agreed with the points made, as one said: “Do Harry and Meghan ever take any responsibility for their own mistakes?”