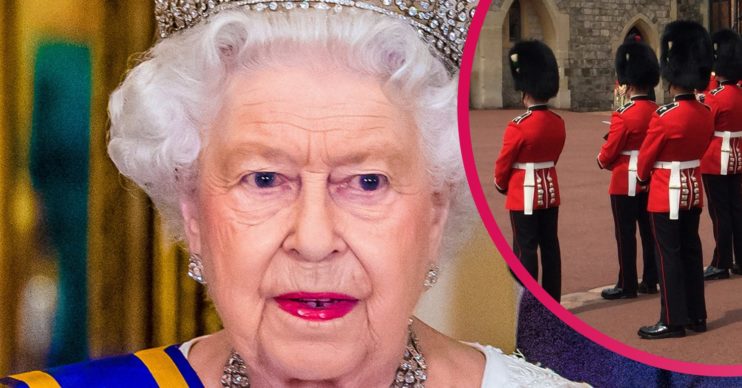 The Queen’s Guards ‘jailed for attending party during lockdown’

The Queen’s Guards have reportedly been jailed for attending a ‘mini-rave’.

16 of the Queen’s Guards at Windsor Castle reportedly attended the party during lockdown.

The Queen, 94, and Prince Philip, 99, were shielding from coronavirus at Windsor Castle at the time.

The soldiers are apparently from the Welsh Guards, and the party took place at a riverside park.

According to reports, it’s the largest amount of British soldiers arrested for the same crime at the same time.

13 of the guards have reportedly been sentenced – with three still awaiting their fates.

Their sentences range from 14 to 27 days to be spent in jail.

The incident occurred in June, and a source told The Sun their outing ‘got out of hand’.

The source said: “They had gone to a park near the river to have a few beers and play football but things got out of hand.”

Here, all serving staff as part of ‘HMS Bubble’ self-isolated.

Neither household staff or guards could mix with people outside of the ‘Bubble’.

An Army spokesperson said: “We are proud of our Armed Forces for the support they have provided the NHS in response to COVID-19, but we demand the highest standards of behaviour from all of our personnel.

The Queen and Prince Philip are now at Balmoral

“Following a breach in social distancing by several Welsh Guardsmen an investigation was conducted and the incident has been dealt with internally.”

As of August, The Queen and Prince Philip have relocated to their summer residence Balmoral, Scotland.

Meanwhile, earlier this year, a royal member of staff became the subject of a thievery.

A 37-year-old male royal servant became a suspect after a missing medal ended up on eBay.

The medal became listed on the bidding site for £350.

The man in question reportedly boasted of his royal adventures on social media.

A hospitality assistant, he had worked for the royal household for six years.