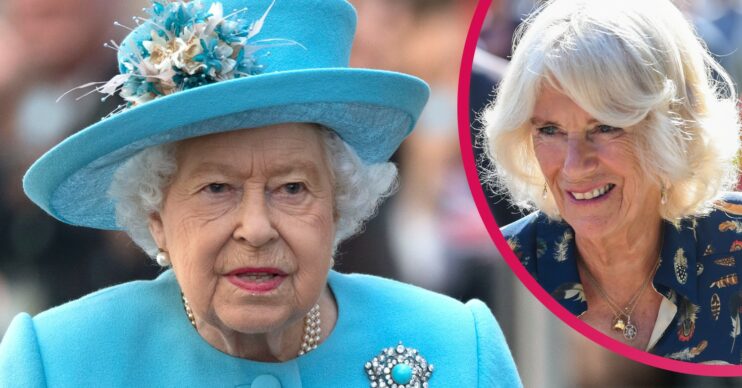 Her Majesty marks 70 years on the throne today

The Queen has said she wants Camilla to become ‘Queen Consort’ when her son Prince Charles is King.

Today, Her Majesty marks 70 years on the throne, becoming the first British Monarch to celebrate a Platinum Jubilee.

On Saturday evening, the Queen issued a message to mark the milestone and revealed her “sincere wish” about the Duchess of Cornwall.

The Queen wants Camilla to be ‘Queen Consort’

The message read: “Tomorrow, 6th February, marks the 70th anniversary of my Accession in 1952.

Read more: The Queen stuns in new photos released ahead of Platinum Jubilee

“It is a day that, even after 70 years, I still remember as much for the death of my father, King George VI, as for the start of my reign.

“As we mark this anniversary, it gives me pleasure to renew to you the pledge I gave in 1947 that my life will always be devoted to your service.”

✍️ On the eve of the 70th anniversary of her Accession to the throne, The Queen has written a message thanking the public and her family for their support, and looking forward to #PlatinumJubilee celebrations over the coming year. #HM70 pic.twitter.com/U6JfzeZMLn

The Queen went on to say that she feels “fortunate” to have had the “steadfast and loving support” of her family.

She continued: “I was blessed that in Prince Philip I had a partner willing to carry out the role of consort and unselfishly make the sacrifices that go with it.

“It is a role I saw my own mother perform during my father’s reign.”

The monarch then thanked the public for their support over the last seven decades.

Her Majesty said: “I would like to express my thanks to you all for your support. I remain eternally grateful for, and humbled by, the loyalty and affection that you continue to give me.

Concluding her statement, the Queen said she will continue to serve the public with “all my heart”.

She added: “I hope this Jubilee will bring together families and friends, neighbours and communities – after some difficult times for so many of us – in order to enjoy the celebrations and to reflect on the positive developments in our day-to-day lives that have so happily coincided with my reign.”

She signed off the message: “Your Servant, Elizabeth R.”

What have royal fans said?

The message has sparked a huge reaction online, especially the Queen’s wishes for Camilla to become Queen Consort.

Many disapproved as one person said on Twitter: “Always thought I was relatively indifferent to the Royals, but Camilla being known as Queen Consort really annoys me…”

Another added: “Absolutely not! The minute Camilla has any sort of title of Queen, I stop being a royalist.”

Read more: The Queen on ‘sparkling form’ during public engagement

A third said: “Camilla as Queen Consort… Absolutely not. I have respect for The Queen & all years of service… but this NO.”

However, others approved of the news as one tweeted: “The amount of Camilla bashing is unbelievable. He has married the love of his live, can that not be seen.”

Another said: “Wholly agree with Camilla, Duchess of Cornwall being known as Queen Consort: it’s the natural precedent.”

Do you want Camilla to become Queen Consort when Charles is King? Head to our Facebook page EntertainmentDailyFix and tell us.