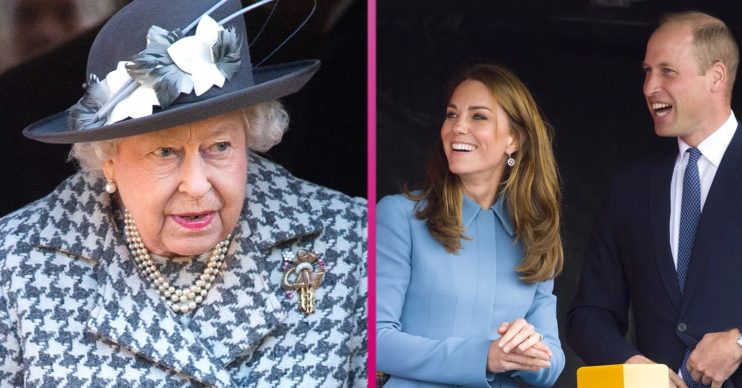 They enjoyed a festive event at Her Majesty's lockdown home

The Queen, the Duchess of Cambridge and Prince William reunited today for the first time since lockdown started in March.

The 94-year-old monarch has spent much of that time in isolation with her husband Prince Philip, 99, at Windsor Castle.

The Duke of Cambridge and Kate Middleton, meanwhile, have been touring England, Scotland and Wales in the past week, meeting heroes of the coronavirus pandemic to thank them for their efforts during lockdown.

The Queen reunited with the Duke and Duchess of Cambridge

Today (Tuesday, December 8), the couple finally reunited with the Queen, Prince Charles and Camilla at Windsor.

Also there were Princess Anne and the Earl and Countess of Wessex.

Read more: Prince Harry and Meghan Markle deny they are ‘launching their own awards to rival The Queen’s Honours’

The event saw Her Majesty stand on the steps to an entrance and chat with her relatives.

The Queen also reportedly thanked the band, and the wider Salvation Army for the work it has done in helping people throughout the coronavirus crisis.

It follows reports the monarch will be having a ‘quiet’ Christmas this year.

The Queen and The Duke of Edinburgh have decided that this year they will spend Christmas quietly in Windsor.

Over the festive period, Her Majesty will remain at Windsor Castle with the Duke of Edinburgh.

In a statement, The Palace revealed: “Having considered all the appropriate advice, the Queen and the Duke of Edinburgh have decided that this year they will spend Christmas quietly in Windsor.”

Christmas 2020 will reportedly mark the first time in 33 years that the Queen has not spent the festive period at Sandringham House, her country pad in Norfolk.

But despite that, the Royal Family has still gone all out as far as the decorations are concerned.

Read more: Prince Harry ‘desperate to have his military titles reinstated next year by The Queen’

Ahead of the weekend, their Instagram account revealed a rather lavish tree at Windsor’s St. George’s Hall.

The post read: “Deck the Halls with Boughs of Holly. The magnificent 20-foot-high Norway spruce tree is pictured in St George’s Hall.

“The tree was taken from Windsor Great Park and has been dressed with hundreds of iridescent glass and mirrored ornaments.”