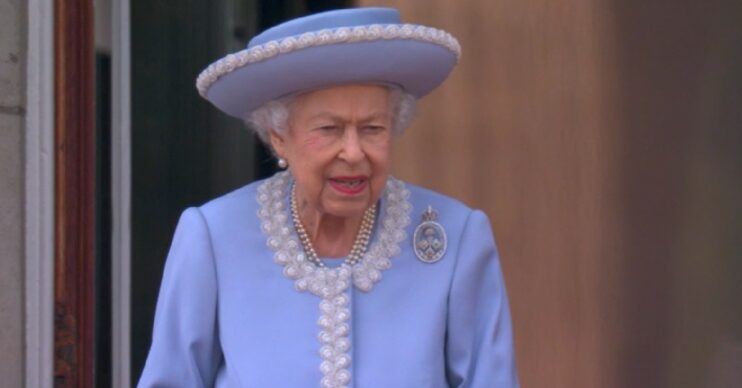 She looked stunning in blue!

The Queen appeared on the balcony of Buckingham Palace during Trooping the Colour today as royal fans were delighted.

The monarch, 96, was a vision in blue as she stepped out onto the Buckingham Palace balcony accompanied by the Duke of Kent.

There had been speculation whether the Queen would appear on the balcony amid her ongoing mobility problems.

But the monarch was all smiles as she made an appearance to mark her Platinum Jubilee celebrations.

The Queen at Trooping the Colour

Her Majesty was wearing a light blue coat dress which featured white detailing.

She sported a matching hat and also had a walking stick with her.

The crowd cheered as the monarch stepped onto the balcony. She watched on as the procession took place outside the palace.

Royal fans were over the moon as one person said on Twitter: “The Queen on balcony of Buckingham Palace.

“She looks wonderful and seems to be thoroughly enjoying the event.”

Another wrote: “Watching #TroopingTheColour on @BBCOne – such a spectacle!

“Heartening to see the Queen on the balcony.”

A third added: “HM The Queen looks lovely. Accompanying her on the balcony is her cousin, HRH The Duke of Kent.”

It comes after members of the Royal Family took part in the carriage procession earlier this morning.

Kate Middleton and her three children travelled in one carriage with Camilla, Duchess of Cornwall.

And it certainly left fans thrilled!

One moment caught on cameras saw Charlotte give her little brother Louis a slight ticking off.

Louis looked ecstatic as he waved to the cheering crowds.

But as he got a bit carried away, Charlotte put his hand down and laughed.

Did you enjoy seeing the Queen? Leave us a comment on our Facebook page @EntertainmentDailyFix and let us know.