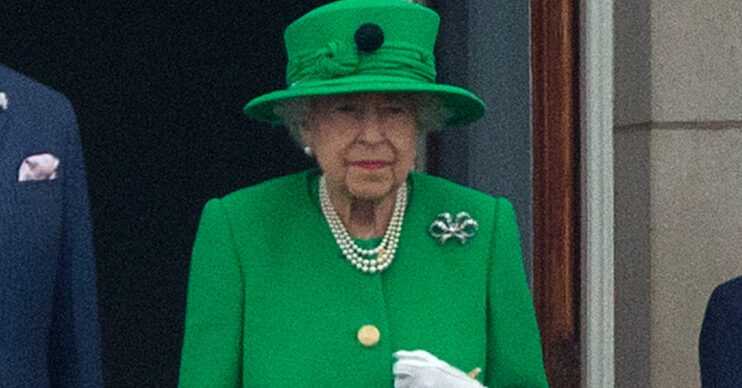 Prince Philip was there in spirit

The Queen seemingly made sure to pay tribute to Prince Philip during her Platinum Jubilee celebrations.

Her Majesty, 96, appeared on the Buckingham Palace balcony alongside some of the Royal Family to watch the celebrations and wave to fans.

Although the Queen was without her beloved Philip, who died last year, it seems she made a nod to him.

She made a subtle nod to the Duke of Edinburgh by adding a black mourning pin to her green hat.

The Queen wasn’t the only one who appeared to pay her respects.

Kate Middleton also wore a pair of the Queen’s earrings that she previously wore to his funeral.

The Queen joined three generations of her family on the Buckingham Palace balcony for the finale of the pageant.

Her appearance rounded off a star-studded procession along The Mall towards the palace.

Her Majesty said in a heart-warming statement that she had been “humbled” by the amount of people who had taken part in the celebrations.

It said: “When it comes to how to mark 70 years as your Queen, there is no guidebook to follow. It really is a first. But I have been humbled and deeply touched that so many people have taken to the streets to celebrate my Platinum Jubilee.

“While I may not have attended every event in person, my heart has been with you all, I remain committed to serving you to the best of my ability.

“I have been inspired by the kindness, joy and kinship that has been so evident in recent days.”

“I thank you most sincerely for your good wishes and for the part you have all played in these happy celebrations,” she added.

Head to our Facebook page @EntertianmentDailyFix and tell us what you think of our story.