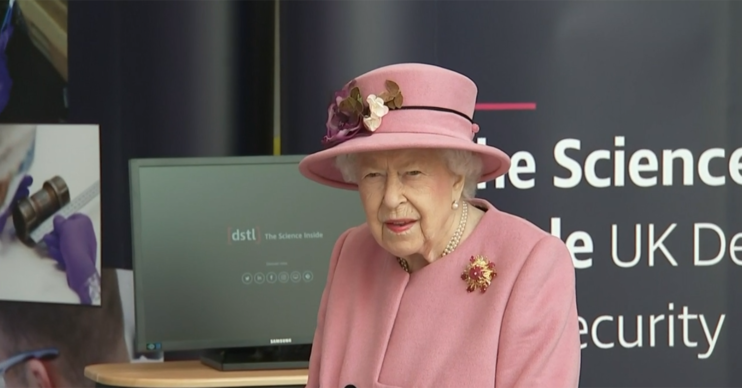 Her Majesty arrived by helicopter for the engagement

The Queen joined Prince William today for her first official engagement outside royal grounds since March.

Her Majesty and the Duke of Cambridge visited the UK’s Defence Science and Technology Laboratory on Thursday to officially open its new Energetics Analysis Centre.

They met with scientists who have provided support to the country’s coronavirus response.

The Queen and Prince William team up for engagement

William and The Queen had a private tour of the Energetics Enclosure to see displays of weaponry and tactics used in counter intelligence.

Before leaving, The Queen opened the new Energetics Analysis Centre and unveiled a plaque.

Meanwhile, some people questioned why The Queen or William weren’t wearing face masks.

However, the Palace said the decision was made after discussions with The Queen’s medical team.

Read more: Prince Harry ‘set to return to the UK and face telling off from The Queen’

A royal source added to the Mirror Online: “Specific advice on this visit has been sought from the Medical household and relevant parties, and all necessary precautions taken, working closely with Dstl.

“All Dstl staff have also been involved in the UK’s response to Covid-19 so are well versed in the necessary precautions.”

This is the first engagement The Queen has met members of the public away from Windsor Castle after she moved there due to the pandemic.

On Thursday, Her Majesty arrived by helicopter while William travelled separately.

Everyone who met the royals tested negative for the virus.

Meanwhile, this is the first time The Queen and William have seen each other since their summer break at Balmoral.

She paired the look with a matching hat by Rachel Trevor Morgan.

During lockdown earlier this year, The Queen and Prince Philip shielded from coronavirus at Windsor Castle.

The couple then enjoyed their annual summer break at Balmoral.

Her Majesty has reportedly been residing at Windsor Castle this month so she can commute to Buckingham Palace for her limited duties.

The Queen and the Duke of Edinburgh are reportedly within a special ‘bubble’ with their household staff, in order to try and resume normal routine despite coronavirus.

According to reports, William, his wife Kate Middleton and their three children joined The Queen and Philip at Balmoral over the summer.