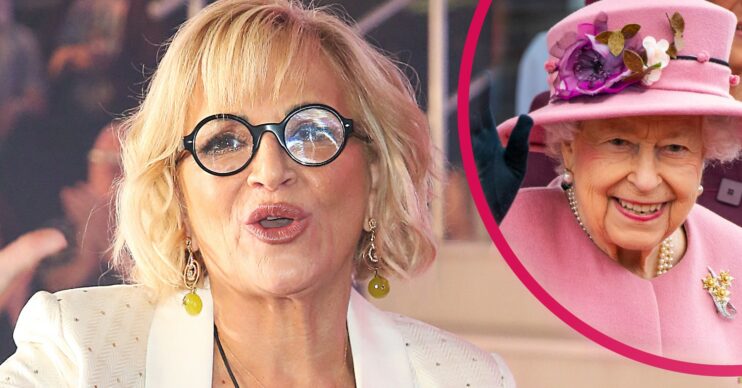 Her Majesty is recovering from a sprained back

Celebrity psychic Sally Morgan has revealed that she fears for the Queen amid her health woes.

The monarch, 95, pulled out of attending Sunday’s Remembrance Service after spraining her back, Buckingham Palace said.

Sally, 70, who was Princess Diana‘s psychic, spoke to The Sun about her concerns.

When asked about what would happen next for the Queen and the monarchy, Sally said: “Charles will take the throne in the not-too-distant future, but there’s no way the Queen will hand it over.

Read more: Prince Charles ‘flies out of UK after getting Queen’s permission during phone call’

“She will never abdicate. But Charles can’t wait to be King and he deserves it.”

These comments from Sally come during a tough time for the psychic after she lost her husband John to Covid-19 earlier this year. She insists, however, that he would want her to be kept busy and go back to work.

What else did Sally say?

Sally’s comments about the Queen came during the launch of her new book, Secret Spirit.

Speaking to The Sun, she admitted that she has struggled in the wake of her husband’s death.

Sally said she struggles “with the mornings because John took care of everything while I went to work so I keep forgetting to do things”.

Read more: The Queen shares message about ‘passage of time’ before wedding anniversary

She also revealed that her late husband John paid her a visit not soon after his passing.

She claims she saw him in her bedroom after coming out of the bathroom after having a shower.

How did Psychic Sally make her name?

The Queen isn’t the first royal that the celebrity psychic has had premonitions about.

Sally rose to fame after becoming a professional medium. She’s had numerous shows on TV, including Sally Morgan: Star Psychic and Psychic Sally: On the Road.

Her predictions and psychic abilities have come under much scrutiny from the public and experts alike during her career.

What do you make of Psychic Sally’s predictions? Leave us a comment on our Facebook page @EntertainmentDailyFix and let us know what you think.