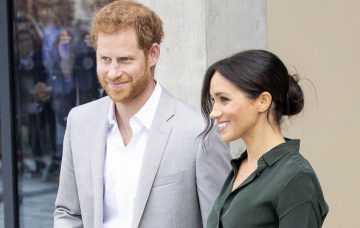 The Duke and Duchess of Sussex thrilled fans on Monday morning by announcing they’re expecting their first baby.

But royal watchers had called the baby announcement days earlier, following the couple’s appearance at Princess Eugenie’s wedding on Friday.

And the rumours intensified again on Monday morning when Meghan arrived in Sydney clutching two purple folders in front of her stomach.

Viewers immediately suspected Meghan, 37, was pregnant by her choice of clothing at Eugenie’s big day.

She wore a loose-fitting navy Givenchy coat to the nuptials, which she kept on throughout the ceremony despite it being a mild temperature day.

Judging by the fact that she’s wearing a heavy coat indoors; Meghan Markle is either pregnant or the type to get chilly easily. #royalwedding #royalwedding2

And Meghan hints she's pregnant. Why else would you wear a cover up coat to a wedding when you know the world will be watching you. #RoyalWedding pic.twitter.com/1XazVi5DdQ

I don't want to jump the gun and say that Duchess Meghan is pregnant however….she wore a coat the entire time during the wedding. #duchessofsussex

I think Meghan Markle is pregnant, looking at that coat she wore to the wedding. That makes me ridiculously happy.

The royal also slipped into the chapel at speed after arriving by car; royal experts on the day suggested she didn’t want to upstage the bride, but perhaps it was because she didn’t want to showcase a baby bump on Eugenie’s big day?

Jumping on the bandwagon, with the very rushed entrance and the huge coat decided Meghan is pregnant #RoyalWedding

Then, after Meghan and Harry arrived in Sydney to start their overseas tour on Monday, many speculated that Meghan was holding purple files in front of her stomach to hide a bump.

Fans called it on Twitter, predicting a baby announcement was on the way.

Who matches their outfit to their folders? If Meghan isn’t pregnant I’ll be surprised because that whole outfit/folder scenario looks hella planned. And who’s ever seen a modern royal carrying paperwork at all let alone two folders full?! #HarryandMeghan #MeghanMarkle #RoyalTour

Wake up Sheeple! The purple folders were strategically placed to hide the pregnancy!