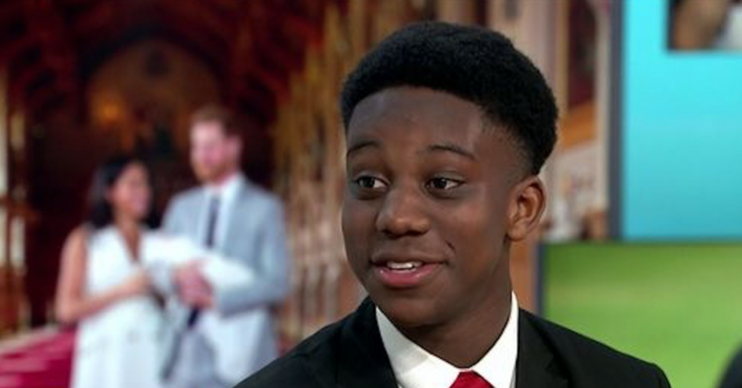 The teenage pupil who hugged the Duchess of Sussex and quipped about how beautiful she is has offered his apologies to Prince Harry for giving his wife a cuddle.

16-year-old Aker Okoye met Meghan Markle last Friday as she paid a visit to his school in Dagenham, east London.

Head Prefect Aker was cheered by his fellow pupils as he gleefully praised Meghan, joking: “She really is beautiful, innit? I had to speak the truth there.”

However, in a letter published by The Sun, it seems Aker has contacted the Duke of Sussex to wish the couple good luck for the future as they step away from the royal family.

The Duchess of Sussex visited Robert Clack School, to celebrate the women of the future, and also highlight the important role men and boys play in International Women’s Day. The Duchess asked a young student to come on stage and share his perspective on the importance of the day, and whilst much attention has been focused on his initial comment, what he shared beyond that was compelling and true. Please watch the full video and tag a man in your life, and have him share what #IWD means to him

He also noted how he almost met Harry last year when the Prince opened a Future Youth Zone near to where Aker is from in London but had to miss out because he was away on a school trip.

Describing Friday as “the best day of my life so far”, Aker said in the handwritten letter: “Dear Harry and Meghan. Harry, hope you don’t mind me writing this letter.

I hope you didn’t mind me cuddling your wife.

“I hope you didn’t mind me cuddling your wife. I was just overwhelmed and shocked to see her arrive at my school.

“It was a pleasure to hear her speech and to speak in front of her as well. She is truly inspirational.”

‘She really is beautiful, init.’

Aker Okoye, the 16-year-old pupil who stole a kiss from the Duchess of Sussex, describes the moment they met. 😘

He has even written a letter to Prince Harry to apologise for cuddling his wife. 😅 pic.twitter.com/ZwV2TZZADs

He joked he had decided to write to Harry after reading a comment on social media.

Aker explained: “There was a comment on an Instagram post that said if I’m dead in the next six months we know who sent the hit – so I thought I better cover my back.'”

50 years ago, women in Britain won the right to equal pay. That monumental moment began with one courageous and inspiring group of women in a factory in Dagenham, England. In 1968, facing a pay settlement that declared them less skilled than men, the sewing machinists of the Ford Motor Company walked out on strike. In the face of great pressure, they stood firm, and two years later the UK Parliament was forced to pass the Equal Pay Act, protecting and supporting working women ever since. To mark International Women’s Day, The Duchess of Sussex visited Dagenham to meet with Geraldine Dear, one of the strikers, and spend time with students at the Robert Clack Upper School to meet the town’s next generation of female role models, and talk to young women and men about the women who inspire them. • “Being in Dagenham is incredibly profound. Because as you can see with Geraldine and the other women who had the strength to really stand up for something that they knew needed to be done. This is the best example of no matter how small you might feel, how low you may feel on the ladder or the totem pole, no matter what colour you are, no matter what gender you are, you have a voice, and you certainly have the right to speak up for what is right.” – The Duchess of Sussex A lifetime advocate and campaigner for gender equity, The Duchess joined a special assembly to celebrate this remarkable local story, as well as recognise the social, economic, cultural and political achievements of all women around the world. #InternationalWomensDay #IWD2020 #EachForEqual Photo © The Duke and Duchess of Sussex / Chris Allerton

He also admitted to being “starstruck” by the opportunity to speak in front of Meghan and said it was a moment he will “cherish for the rest of my life”.

“She is more than a pretty face,” Aker insisted. “She is strong, committed and really inspirational. I felt very privileged.”

Aker also revealed Meghan told him his comment about her being beautiful was “brave”.