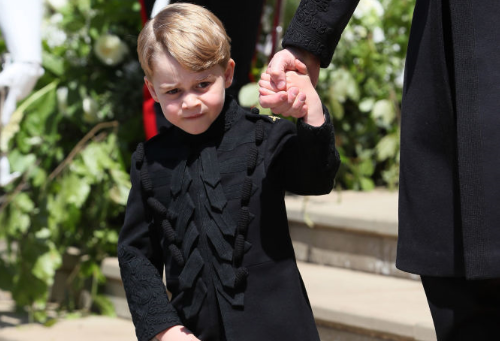 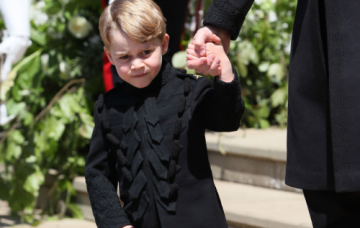 He's only ever been seen in shorts before

We are used to seeing Prince George in short and shirt ensembles, so fans were surprised when the Prince sported a pair of trousers at the royal wedding.

The four-year-old was a page boy for his uncle Prince Harry’s wedding to Meghan Markle on Saturday.

The son of the Duke and Duchess of Cambridge looked dapper in smart black trousers with a red stripe and a matching three-quarter length black jacket.

George and the other page boys wore a miniature version of the Blues and Royals uniform, which Prince Harry and William wore for the big day.

Watching the wedding on Saturday, royal fans were stunned to see the young Prince in a pair of trousers.

“An exciting day for Prince George! This was the first time he appeared in public wearing full trousers!” another tweeted.

The choice of trousers may be causing mutterings in some circles however, as it’s protocol for the upper classes to dress their young boys in shorts until the age of seven.

Ahead of the big day British etiquette coach William Hanson told HELLO!: “Prince George is always seen in shorts because upper class and upper middle class parents believe that little boys should look like little boys, and so try to keep their offspring looking as cute and innocent for as long as possible.

“It’s one of the many silent class indicators we have in Britain. Trousers on young boys is considered a tad suburban and lower market.”

Is this another tradition that Meghan wanted to waive?

On Saturday, George and his sister Princess Charlotte stole the show when they arrived at St George’s Chapel ahead of the nuptials.

The world got a little look at them as they scampered past Meghan as she arrived at the altar, aside her groom.

There were 10 bridesmaids and page boys in total at the couple’s wedding.

Meghan had six bridesmaids, including Charlotte. Harry had four pageboys.

Meghan’s bridesmaids were all younger than eight years old, which kept with royal tradition as bridesmaids are usually young girls and children.

The youngest bridesmaid was two-year-old Zalie Warren, who is Harry’s goddaughter.

Meghan and Harry are now officially husband and wife and are now known as The Duke and Duchess of Sussex.

Did you watch the royal wedding? Leave us a comment on our Facebook page @EntertainmentDailyFix and let us know what you think!