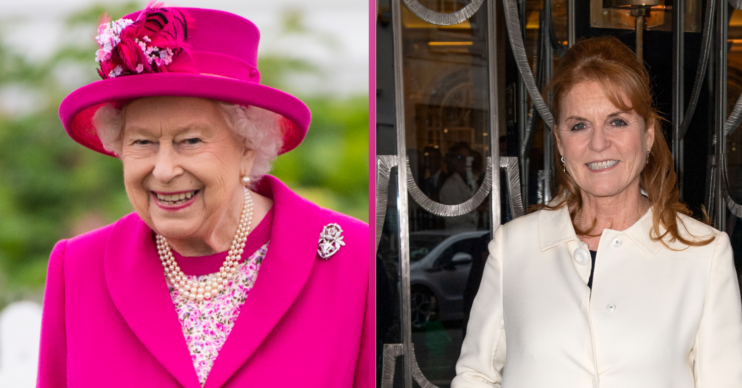 Sarah Ferguson, Duchess of York, has paid tribute to her former mother-in-law, the Queen.

The royal turned author joined her pal, former model Twiggy for an intimate chat on her weekly podcast ‘Tea with Twiggy.’ Fergie told how the monarch has always ‘believed in her and was her greatest mentor’.

During the chat to promote her latest Mills & Boon debut romance novel, Her Heart For A Compass, Fergie also praised the Queen for being ‘modern, flexible and forgiving’.

Sarah Ferguson compares the Queen to her own mother

The duchess, 61, who holidayed at Balmoral last week with the Queen, ex-husband Prince Andrew, daughter Eugenie, son-in-law Jack Brooksbank and grandson August, also liken their relationship to the one she had with her late mother, Susan Barrantes.

She said: “I think to myself that honestly, my mother-in-law has been more of a mother to me than my mother.”

The comments come after a tough week for the York family.

Prince Andrew was served a civil lawsuit over allegations he sexually abused Virginia Roberts Giuffre when she was a minor under US law.

Sarah married the Duke of York in 1986 at Westminster Abbey, and the couple welcomed Princess Beatrice in 1988 and Princess Eugenie in 1990.

However, the couple announced their split in March 1992.

She was pictured having her toes sucked on holiday by Texan millionaire John Bryan.

As a result, she became estranged from the Royal Family.

She is very protective over he family

Despite their split, Prince Andrew and his ex-wife remained remarkably close friends and co-parented their two daughters.

Meanwhile, Fergie is known to be fiercely protective over her brood.

She only recently defended her ‘superhero son-in-law’ Jack after he was photographed on a Yacht in Capri frolicking with scantily clad models.

Sarah told The One Show host Gethin Jones: “Jack is a man of integrity. He is one of my most favourite people. I call him James Bond.

“And is just a superhero in my book, and he is a great father and fabulous husband.

“He is never in front of the house.

“Jack likes to be at the back, and so for them to make this a story is, in fact, completely fabricated.”