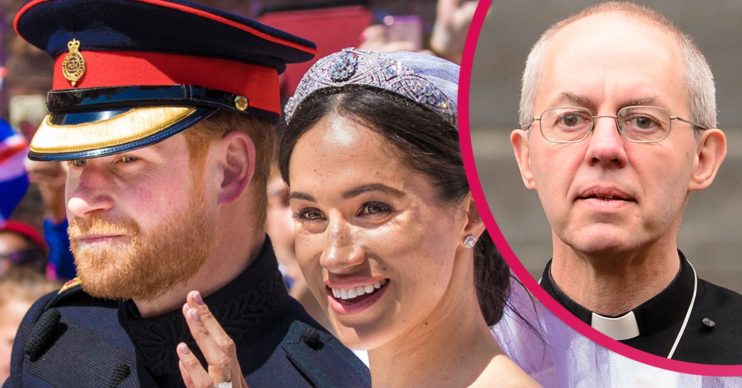 The Archbishop of Canterbury has stunned royal watchers with the news that he thinks being part of the royal family is like being in prison.

Justin Welby, who married Prince Harry and Meghan Markle in 2018, made the stunning claims to the Financial Times.

What else did Justin Welby say?

He harked back to the time of Edward VIII, who abdicated so that he could marry Wallis Simpson.

Welby added: “If you go back to the 1930s, Edward VIII… He was still a celeb and followed everywhere once he’d abdicated.

“We expect them to be superhuman.”

The Archbishop of Canterbury presided over Meghan and Harry’s wedding. And it’s thought this could have something to do with his outburst.

They famously claimed during their Oprah Winfrey interview that he secretly married them three days earlier in the grounds of Frogmore Cottage.

Meghan said: “You know, three days before our wedding, we got married.

She has a sense of duty, but I don’t think she sees it as a life sentence.

“No one knows that. But we called the Archbishop, and we just said, ‘Look, this thing, this spectacle is for the world, but we want our union between us’.

“So, like, the vows that we have framed in our room are just the two of us in our backyard with the Archbishop of Canterbury.”

Royal news: How did Archbishop of Canterbury respond?

After much confusion, he finally confirmed that their “legal” wedding was indeed at St George’s Chapel.

Read more: Meghan Markle ‘will fight back against Piers Morgan’

He told Italian newspaper la Repubblica: “The legal wedding was on the Saturday.

“I signed the wedding certificate, which is a legal document. I would have committed a serious criminal offence if I signed it knowing it was false.”

But now some royal experts are accusing The Archbishop of trying to make amends with Harry and Meghan with his seething attack on the royal family.

Royal commentator Richard Fitzwilliams believes he’s trying “to show as much sympathy with Harry and Meghan as he can, especially since he has had to deny having them married twice”.

Whereas Phil Dampier, author of Prince Philip: Wise Words and Golden Gaffes, told the MailOnline he doubts The Queen sees her role as one of an inmate.

He said: “She has a sense of duty, but I don’t think she sees it as a life sentence, which implies something which has to be endured.

“She said at a young age that she would devote her whole life to service, and she has always wanted to do her parents proud, which no one can deny she has. So for him to use such words is very surprising.”

What do you make of all of this? Let us know on our Facebook page @EntertainmentDailyFix.