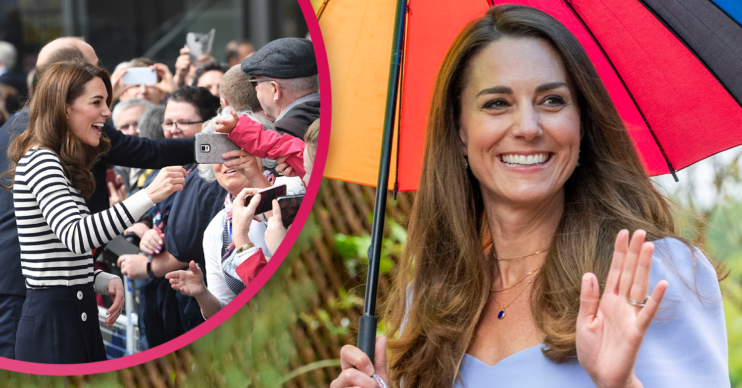 Royal insider: Does Kate Middleton get paid? What are her royal duties?

Kate Middleton is without a doubt one of the most treasured members of the royal family.

She’s at home on the red carpet, is a natural when it comes to representing the monarch and shines on royal engagements with husband Prince William.

But just what are Kate‘s royal duties? And does she get paid for them?

Find out all you need to know here.

What are Kate Middleton’s royal duties?

Kate has listed her occupation as “Princess of the United Kingdom” on the birth certificate of her children.

As a result, her main role is to assist the Queen in carrying out her duties.

She’s also expected to carry out work in areas of public and charitable service.

Read more: 6 things you didn’t know about life for Kate Middleton before she joined the royal family

No two days look the same for the busy mum of three, though.

Each year, the royal family carries out more than 2,000 official engagements. They also entertain more than 70,000 people and answer 100,000 letters.

They also serve as patron or president of more than 3,000 charitable organisations.

When it comes to charity, Kate usually has daily meetings with charitable organisations.

She’ll also attend events and even volunteers some of her own time for certain causes.

Her role representing the Queen could see Kate attend at a ceremonial event, an official engagement or a royal tour abroad in her capacity as the Duchess of Cambridge.

The busy mum of three finds time for her family

Official duties aside, Kate is also mum to George, Charlotte and Louis.

And, while she does have support from a nanny, she likes to cook for her family and spend as much time as possible with her brood.

Read more: Kate and William ‘seriously considering’ a move closer to the Queen

She’s even been spotted doing the grocery shopping, despite having an army of assistants who could do it for her.

Does Kate Middleton get paid for her royal role?

Kate doesn’t officially earn a salary for her royal duties, but she isn’t exactly hard up.

It’s been reported that she has amassed a personal fortune of around £7 million. This is largely thanks to her parents’ company Party Pieces.

Husband Prince William, meanwhile, also inherited around £7 million after the death of his mother Princess Diana.

The couple’s living expenses are financed by the Duchy of Cornwall.

The Duchy of Cornwall is a portfolio of properties established by Edward III in 1337 to provide an income for himself and future Princes of Wales.

Of course, Prince Charles currently holds that title and, out of his annual income, he pays for the expenses of his sons – until Harry stepped down from royal duties, that is.

It’s claimed that the Duchy reportedly spent £3.6 million to cover the official duties of William, Kate and Harry in 2017.

When it comes to Kate, things like her official travel, wardrobe and housing would be covered by the Duchy of Cornwall.

Does Kate’s family have a fortune?

However, thanks to Party Pieces and parents Carole and Michael Middleton, Kate has quite the family fortune to fall back on.

The company is thought to be worth around £36 million.

And it’s claimed this is “thanks in no small part to the exposure it gets from being associated with the royals”.