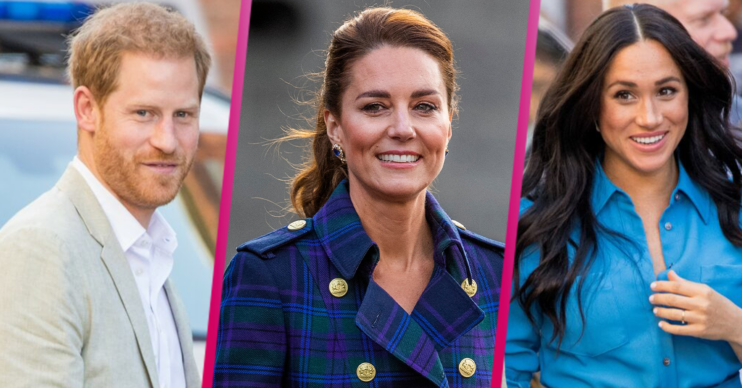 She's determine to reunite the family

Cast your minds back a few years and the relationship Kate Middleton shared with brother-in-law Prince Harry really was a thing of beauty.

The single flame-haired prince accompanied the Duke and Duchess of Cambridge to events where Kate and Harry were seen chuckling like teenagers.

They even focused on the more important things in life and launched their own mental health campaign together.

However, despite tensions obviously flaring when Meghan Markle came on the scene, Kate’s determination to keep her extended family united has clearly never wavered.

Here we reveal the five times Kate has acted as peacemaker between Harry, Meghan and the royal family.

Kate’s very much viewed as the “jewel in the monarchy’s crown”. And she recently proved to be a force for good when baby Lilibet was born.

It’s been reported that Harry texted Kate shortly after the birth of his daughter as the row over her name apparently raged on.

Read more: Kate Middleton’s most beautiful outfits ranked from 10 to one

It’s thought this interaction “cemented” Kate’s role as a “bridge” between Harry and brother William.

Shortly after her birth, she said: “I wish her all the very best, I can’t wait to meet her.

“Hopefully that will be soon.”

Perhaps the most obvious chance we got to see Kate in action as peacemaker was at Prince Philip’s funeral back in the spring.

Harry was clearly apprehensive about seeing his family – without his wife – for the first time since that Oprah Winfrey chat.

Read more: Why did Kate and William split? A timeline of their royal romance – bumps and all

But kind-hearted Kate was on hand to smooth things over.

After the service, as William chatted to the Dean of Westminster, Kate engaged Harry in conversation.

As they started to walk back towards Windsor Castle’s private apartments, she subtly stepped back, giving the brothers a chance to speak privately.

Royal expert Katie Nicholl said: “Unsurprisingly it was Kate, the Duchess of Cambridge, who has previously acted as a peacemaker between the brothers, who instigated the much longed for truce after the service.

“In their masks it was impossible to know what was said, but somehow Kate managed to defuse a deeply tense and difficult moment.”

Speaking about Kate when she and William got engaged, Harry revealed: “I’ve always wanted a sister and now I’ve got one.

“I’ve known Kate for years, and it’s fantastic that she is becoming part of the family.”

Indeed, Kate is said to have had an “open-door policy” for Harry while she studied at university with William.

“From the earliest days, Kate always maintained an open-door policy to Prince Harry,” a source told the Daily Mail.

“While they were students she always made him feel welcome at the four-bedroom cottage they rented on distant royal cousin Henry Cheape’s estate, Strathtyrum, just outside St Andrews.

“The three also spent weekends together at the cottage, Tam-na-Ghar, on the Balmoral Estate.”

Being a peacemaker is in her bones

Kate’s uncle Gary Middleton – brother of her mother Carole – has said his niece is a “brilliant arbiter”.

And, he said recently, that she’s doing all she can to end the feud between William and Harry.

The pair certainly seemed friendly at the unveiling of the Princess Diana statue in July, so did Kate have a hand in this?

“If anyone can bring peace to the royals, Kate can. Kate is a brilliant arbiter and peacemaker,” he said.

“Every bone in her body is about making friends and doing the best she can… she’s trying to mediate.”

Kate Middleton intent on rebuilding her friendship with Meghan

Part of that mediation, it seems, also involves reaching out to sister-in-law Meghan to try and rebuild their friendship.

Cast your minds back to the winter of 2018 and the ladies, with their husbands, were being hailed as the “Fab Four” as they walked to church on a chilly Christmas morning.

They also attended Wimbledon together, all smiles as they sat side-by-side in the Royal Box.

And it seems Kate wants to get back to that. Despite a reported falling out over Princess Charlotte’s flower girl dress at Meghan’s wedding.

Since the birth of Lilibet, Kate has reportedly been sending her sister-in-law notes and gifts, as she is “trying to build a relationship,” a royal source told Us Weekly.

Indeed, after seeing the Oprah interview, Kate felt there was a “misunderstanding” between her and Meghan over the dress incident.

And, keen to not hold a grudge, she’s intent on getting the family back together.

So do you think she can manage it? Join the debate on our Facebook page @EntertainmentDailyFix.