Royal fans think the Queen has let slip that she likes Kate more than Meghan!

Has she got her favourites?

It’s all kicking off with fans of the Royal Family, because some royal watchers think that the Queen has accidentally snubbed the newest member of the famous family, Meghan Markle.

The Queen has caused the rumours because of the wording of the official consent that she has to give to her grandson Prince Harry.

The letter of consent was revealed in yesterday’s Privy Council meeting at Buckingham Palace.

It read: “I declare My Consent to a Contract of Matrimony between My Most Dearly Beloved Grandson Prince Henry Charles Albert David of Wales and Rachel Meghan Markle, which Consent I am causing to be signified under the Great Seal and to be entered in the Books of the Privy Council.”

All well and good you might think, but according to royal watchers there was a slight change of wording from Prince William and Kate’s official consent.

Their consent described Kate as “our trusty and well-beloved Catherine Elizabeth Middleton”, whereas Meghan’s was simply “Rachel Meghan Markle.”

And some royal fans immediately thought that was a not-so-subtle snub, proving that Liz likes Kate better than she likes Meghan.

But fear not, The Queen has not been choosing her favourites according to royal blogger Gert’s Royals.

They revealed: “No, the Queen did not slight Meghan Markle by not refering (sic)  to has “Our Trusty & Well-beloved” like she did Kate in the formal Consent with offical (sic) seal released the day of wedding. If you look at the 2 online consents from Privy Council records for Will & Harry, same wording.” 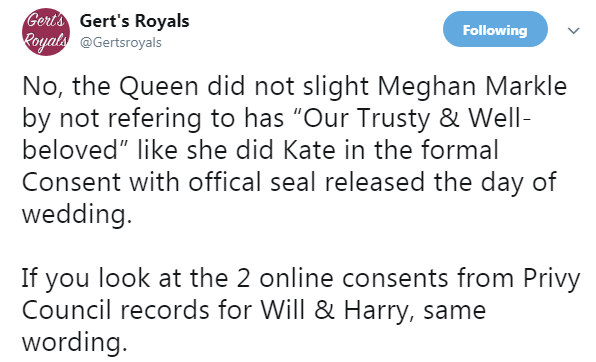 And Gert’s Royals is correct.

If you look at the two black and white announcements, the two wives-to-be are referred to in the same manner.

It is only on an announcement of consent made just before William and Kate’s wedding, that Kate is referred to as “our trusty and well beloved Catherine Elizabeth Middleton”.

All eyes will now be on what gets written on that elaborate announcement when Prince Harry and Meghan get married on Saturday May 19th this year.

The ceremony will take place at Windsor Castle in St George’s Chapel, the same place where Harry’s dad Prince Charles and his wife Camilla had their wedding blessing in 2005.

Has the Queen chosen a fave? Let us know by commenting on our Facebook page @EntertainmentDailyFix!