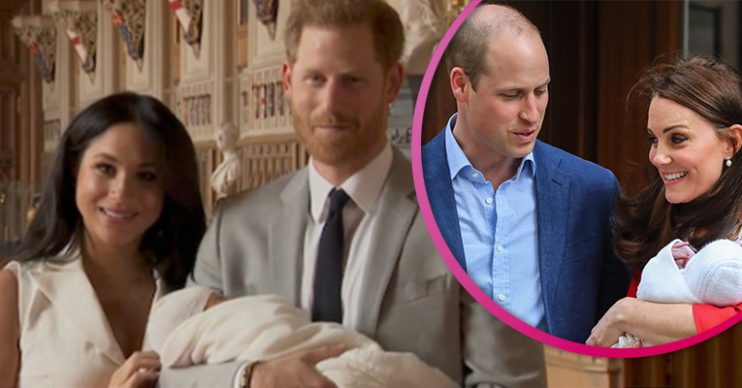 The Duke and Duchess of Sussex proudly showed off their newborn son to the world on Wednesday.

Proud dad Harry walked out holding the latest addition to the royal family alongside his wife Meghan as they spoke to cameras inside St George’s Hall at Windsor Castle about becoming parents.

However, the couple’s first appearance with their son was a lot different compared to how the Duke and Duchess of Cambridge introduced their three children.

Read more: Meghan and Harry show off baby son to the world

The one significant difference that fans picked up on was that Kate held each of the children when posing for cameras, but, Harry held his baby instead of Meghan during their appearance.

One fan joked on Twitter: “Wait Harry is holding the baby?! Does Meghan have to fight him to hold him too?”

Another said: “I really like that they had Harry hold him. Way to switch things up,” while a third added: “I love that Harry is the one holding the baby, as opposed to Kate always being the one holding her babies.”

Kate and William also posed for cameras outside the Lindo Wing at St. Mary’s Hospital in Paddington with their three children – Prince George, five, Princess Charlotte, four, and Prince Louis, one.

Another difference is that the couple did their photocall hours after Kate gave birth whereas Meghan and Harry waited a couple of days.

Meghan and Harry welcomed their first child, a son, in the early hours of Monday morning (May 6).

Since the birth, the couple have enjoyed some peace and quiet at Frogmore Cottage, nestled within the grounds of the royals’ Windsor estate.

On Wednesday, they showed off their baby boy to the world to cameras inside St George’s Hall.

What do you think the royal baby’s name will be? Let us know what you think by leaving a comment on our Facebook page @EntertainmentDailyFix!