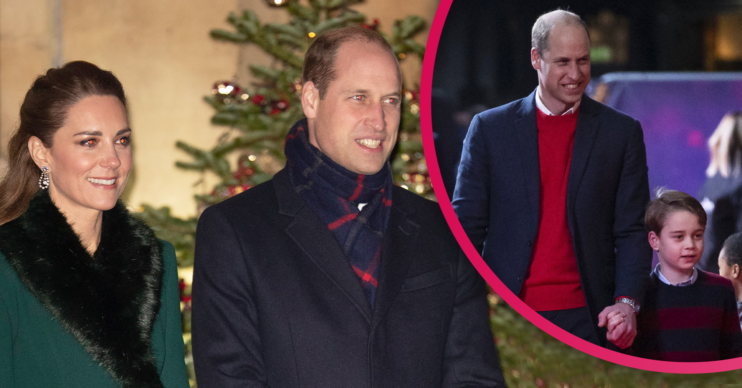 The audience were in stitches – and George wanted to know why!

Prince William took his royal family along to the pantomime on Friday night (December 11) and got more than he bargained for when it came to questions about the performance from his eldest.

Sitting in the royal box, the family of five appeared to be loving the show.

However, William revealed afterwards that some of the panto’s more risqué jokes were questioned by George, seven.

What did William say about the panto joke?

Chatting backstage, William revealed that innocent George had asked him to explain a rather naughty joke.

One of the show’s stars, Nigel Havers, revealed his backstage chat with the prince to the Daily Mail.

And it all centred around a joke told during the performance by Julian Clary that had the audience in stitches.

He said it may take him a while to explain his way out of that one!

He said: “Prince William had us all chuckling when he said that his eldest, George, had innocently enquired why everyone was laughing at one of Julian Clary’s more risqué jokes.

“He said it may take him a while to explain his way out of that one!”

The event was the first time we have seen the young royal family on the red carpet.

Read more: The Queen reunites with William and Kate at Windsor Castle

The kids looked absolutely adorable, with many commenting on how much the trio had grown.

“Oh my! The kids are looking so big now!” said one royal family fan on Instagram.

“I can’t believe how big the kids have gotten – they are so cute,” said another.

“The definition of royal family, just look at them,” said another with the love heart eyes emoji.

During the performance siblings George and Charlotte could be seen excitedly whispering to each other.

Prince Louis, meanwhile, sat and watched the show from his doting mum’s lap.

The Duke and Duchess of Cambridge both wore face masks during the performance.