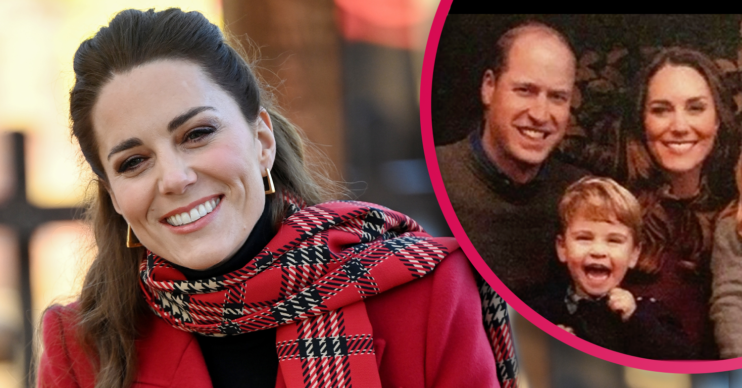 The adorable image features Will, Kate and the three kids

The royal family are in the news for all the right reasons today as the Duke and Duchess of Cambridge‘s Christmas card has been leaked online.

The picture is absolutely adorable and shows doting parents William and Kate with their three gorgeous children.

The picture has never been seen before and sees the family coordinating in autumnal shades of brown and green.

They are seen sitting on hay bales against a backdrop of a pile of wood.

Kate and William are both seen smiling broadly in the picture, which was shared to a royal fan page on Facebook.

Their three children – George, Louis and Charlotte – are in the foreground of the picture.

Prince George, seven, stands as he leans one arm on his beloved dad.

Princess Charlotte, five, looks pleased as punch as she sits on the lap of her mum.

We can never thank you again for all the dedication and sacrifice you have had to make this year. We will be forever grateful.

Both George and Charlotte offer up little grins for the camera, but it’s young Prince Louis who really steals the show.

He looks super excited about the imminent arrival of Santa as the picture shows the two year old in a fit of giggles as he stands between his father’s legs.

It’s thought the picture appears on the Cambridge’s Christmas card this year.

Where and when was it taken?

There are no details on where and when the picture was taken, but judging by their winter apparel, it appears to be recent.

It’s also thought to have been taken at the family’s Amner Hall home.

It hasn’t been officially released by Kensington Palace.

Read more: Meghan and Harry have sent Christmas gifts to the Cambridge family

The card wasn’t addressed to an individual.

Instead, it was written to “all the amazing NHS staff”.

The message inside reads: “Wishing you a very Happy Christmas and New Year.”

It’s been reported that a handwritten note from Prince William is also included in the card.

“We can never thank you again for all the dedication and sacrifice you have had to make this year. We will be forever grateful,” it said.

The card is signed from William and Catherine.

What did royal fans say about the picture?

“Such a wonderful photo of the family,” one royal family fan posted upon seeing the picture.

“They are total family goals,” said another.

“The boys look so much like their dad!” a third commented.

“What a lovely photo!” another said.

“Lovely family. Best wishes to them for the festive season,” said another.

Send your Christmas wishes to the family on our Facebook page @EntertainmentDailyFix.