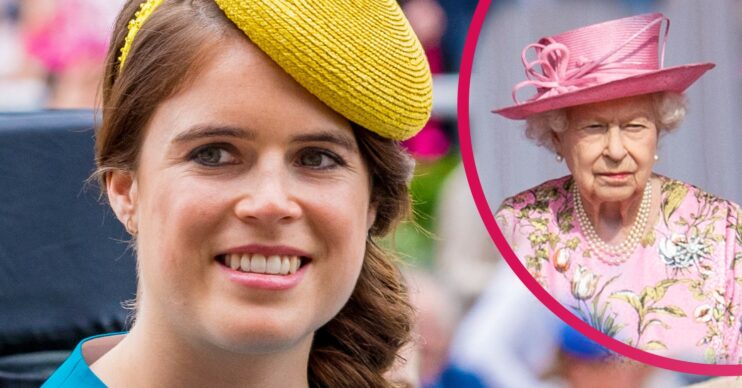 The Queen was said to be on the guest list

In the latest royal family news, Princess Eugenie has reportedly been forced to cancel her son August’s christening due to a COVID scare.

According to the Mirror, the Queen was among the guests who were due to attend the ceremony in London yesterday (July 10).

However, the big day had to be scrapped because another attendee either caught COVID or was told they’d been in contact with someone who had it.

Royal family news: When did Eugenie have her baby?

Eugenie, 31, and husband Jack Brooksbank, 35, welcomed son August in February of this year.

Since then, the Queen’s granddaughter has been sharing cute photos of the child on social media.

One, on Mother’s Day, showed the tot lying on a blanket in a field of daffodils, fluffy bunny slippers on his feet.

Eugenie captioned it: “I’m so excited to be August’s mum and as you can see I’m enjoying my first Mother’s Day.” ⁣

So, if the reports are true, the new mum is sure to be disappointed.

What do we know about the christening plans?

The christening was due to take place at the Royal Chapel of All Saints. No more than 30 people would’ve been in attendance.

The afterparty was going to take place at Royal Lodge.

A report published by the Express earlier this year suggested that Eugenie and Jack were planning to have August christened in a replica of a 160-year-old gown.

Read more: Princess Eugenie ‘better placed than Kate’ to be ‘peacemaker’ for Harry

The original Honiton lace christening gown was commissioned by Queen Victoria and Prince Albert for their daughter Princess Victoria to wear during her baptism in 1841.

Both the Queen and Prince Charles wore it for their christenings, in 1926 and 1948 respectively.

Due to wear and tear, the royal family stopped using the gown in 2004. However, the Queen reportedly commissioned a replica one, and royal babies have worn it ever since.

August will soon have a little cousin as Eugenie’s elder sister Beatrice is pregnant at the moment.

Beatrice, 32, and her husband Edoardo Mapelli Mozzi, 37, are due to welcome their first baby in the autumn.