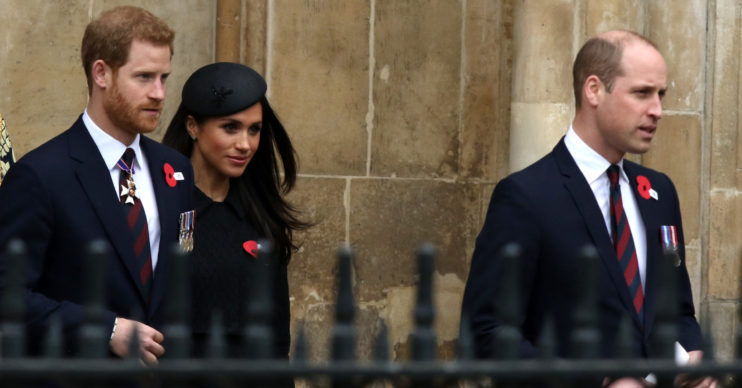 The future monarch could be 'painted as the bad guy'

Royal aides fear Prince Harry and Meghan Markle’s new book will lift the lid on their rift with brother William – and show the dad-of-three “as the bad guy.”

The book ‘Finding Freedom’ is set to be released soon and covers their journey within the Royal Family.

However, royal aides are said to be worried about the publication and its portrayal of the future monarch.

A source told The Sun: “They are worried William especially will be portrayed in a bad light.

“This sort of family spat shouldn’t be out there in public. This shouldn’t happen to future monarchs.

“The book could be the most damaging thing to the Royal Family since Prince Diana’s interview on Panorama with Martin Bashir.”

The insider went on: “The concern is it will somehow paint him as an unfeeling baddie against kind and philanthropic Harry and Meghan.”

Who has contributed to the book?

Harry, 35, and Meghan, 38, are said to have worked with with journalists Omid Scobie and Carolyn Durand on the official biography.

Over 100 people close to the Royal Family are also believed to have contributed, which is said to show the pair in a positive light.

According to the publication, Kensington Palace have said they would not comment on the book.

The royal brothers have reportedly been at loggerheads for years.

Their relationship is rumoured to have further soured when words were exchanged between Kate and bride-to-be Meghan over Princess Charlotte’s bridesmaid dress.

Harry previously hinted at a strained relationship with William.

He admitted in his ITV documentary that they are on “different paths” and have “good days and bad days”.

Earlier this year, the Duke of Cambridge reportedly told a friend he can’t “put his arm around” his brother anymore.

William reportedly made the comment after Meghan and Harry’s announcement that they plan to step back as senior members of the royal family.

The new reports come hours after Meghan and Harry reportedly gave a huge clue that they have quit the royal family for good.

The couple announced at the beginning of the year that they were stepping away from royal duties.

But according to sources, Duke and Duchess of Sussex have made a bold move that proves Megxit is forever.

Reports claim the pair, who are parents to one-year-old son Archie, have stopped using the Queen’s London-based lawyers, Harbottle & Lewis.

Read more: Meghan ‘believes she was destined to leave UK to fight racism in US’