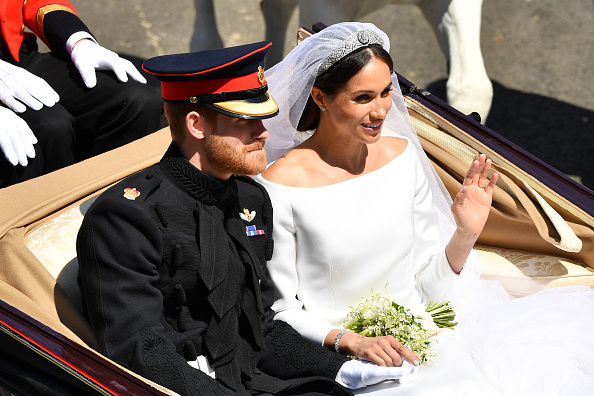 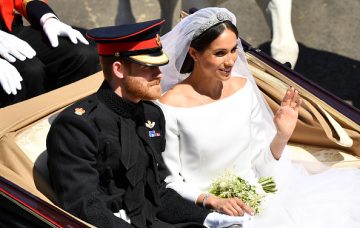 Eagle-eyed royal fans have spotted a previously unseen photo of The Duke and Duchess of Sussex taking pride of place in The Queen’s home.

It was seen in the background of an image showing Her Majesty meeting Honorable George Brandis, the Australian High Commissioner to the United Kingdom, at Buckingham Palace on Wednesday.

The picture shows Prince Harry, 33, standing next to wife Meghan, 36, who is resting her hand on his chest.

Former actress Meghan is wearing a white dress, while Harry is clad in a blue suit.

It’s unclear when the picture was taken, but it could have been after the couple announced their engagement in November.

The Queen keeps several personal photos of her children, grandchildren and great-grandchildren on display in The Audience Room, where she meets visitors to Buckingham Palace.

Harry and former Suits actress Meghan married at St. George’s Chapel at Windsor Castle on May 19.

They were gifted the titles Duke and Duchess of Sussex by The Queen on their wedding day.

The couple have yet to take their honeymoon and no details of where they may travel have been released.

An early favourite was somewhere in Africa, as the continent holds a special place in both Harry and Meghan’s hearts, although lately Canada has been gaining traction.

The Duke and Duchess of Sussex made their first appearance as a married couple last week, attending a garden party at Buckingham Palace to celebrate Prince Charles’ 70th birthday.

It’s been rumoured Harry could next embark on an official visit to the Netherlands, while it’s been speculated the couple will travel to Australia, New Zealand, Tonga and Fiji later in the year, to coincide with Harry’s Invictus Games in Sydney in October.

There are also rumours of a brief visit to Dublin for the newlyweds.

The Duke and Duchess of Cambridge enjoyed a weekend ‘mini moon’ in the UK after their 2011 wedding, before later flying to the Seychelles for their official honeymoon.