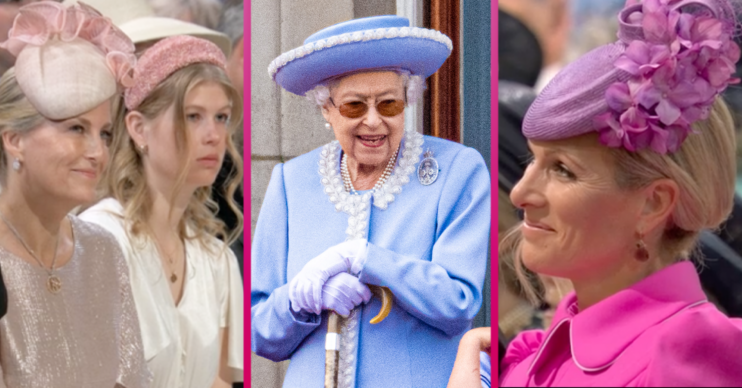 Sophie, Zara and Mike among those wearing pink

The Queen was honoured today (June 3) as the royal family arrived for her Thanksgiving service.

Away from the pomp and ceremony at St Paul’s Cathedral, some members of the royal family clearly had the monarch very firmly in their hearts and minds.

After the Queen pulled out of the service today because she experienced “discomfort” at Trooping the Colour yesterday, several members of her family paid a poignant tribute to the monarch.

As the Queen’s extended family filed into St Paul’s Cathedral, royal experts on BBC One spotted something of a trend.

Sophie Wessex, her daughter Lady Louise and Zara and Mike Tindall were among those wearing splashes of pink.

The hue was spotted as more royals arrived, too, with Freddie Windsor’s wife Sophie Winkleman also in pink.

Princess Anne, too, sported a pink ribbon in her hat.

And, it seems, there’s a reason for the royals sporting the colour.

Pink nod to the Queen revealed

In a secret and pretty poignant nod to the absent monarch, the royals were sporting the colour in tribute to her.

Of course, as royal fans will doubtless remember, back in 1977 the Queen celebrated her Silver Jubilee.

And the colour she chose to wear on the day?

Elsewhere today, Prince Harry and Meghan Markle made their first official public appearance at the Thanksgiving since Megxit.

Meghan looked gorgeous in an off-white coat dress and matching hat, while Harry wore a morning suit with his medals pinned to his lapel.

They were met with cheers as they arrived.

Which is more than can be said for Prime Minister Boris Johnson.

He and wife Carrie were booed when they arrived in the wake of the damning Sue Gray Report.