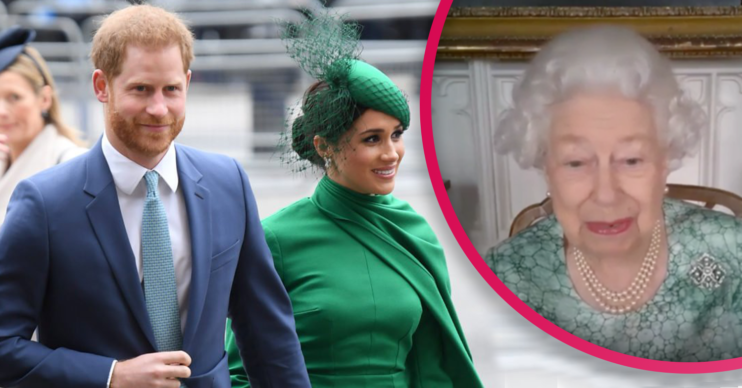 The Queen was all smiles as she made her first public appearance in front of news cameras following Prince Harry and Meghan Markle’s interview.

It was back to business for Her Majesty yesterday (March 12) as she helped mark British Science Week.

On a call with school pupils, teachers and scientists, the Queen shared her astonishment at developments in space exploration.

The monarch, 94, also showed great resiliency by cracking jokes in a week that saw Buckingham Palace dragged into a race row.

Asked about her recollections about meeting astronaut Yuri Gagarian, the Queen had other people on the video call in stitches with her answer.

Scientist Dr Maggie Aderin-Pocock asked: “Yuri Gagarin, the first human to travel out into space was also born on 9th March. And I believe ma’am that you met him. What was he like?”

To guffaws, the Queen admitted some of their meeting was lost in translation.

She continued: “He didn’t speak English. But he was fascinating.

“And I suppose, being the first one [in space], it was particularly fascinating.”

Her Majesty went on to make another quip about early missions into space.

Dr Maggie Aderin-Pocock added: “It must have been very terrifying to be the first one and not really knowing what was going to happen.”

The Queen replied: “Well, yes. And if you could come back again.

It was particularly fascinating.

The Queen also reflected on how scientific advances have aided the world, particularly during the coronavirus pandemic.

She added: “This past year has really driven home the importance of science and technology in all of our lives.

“From the search for the vaccine, the rollout to the public, to the technology that enables all of us in different locations across the UK to gather and speak.”

The Queen planning next moves with Harry and Meghan

According to reports, the Queen wishes to take personal control of the fallout from Harry and Meghan’s explosive chat.

A source told the Daily Mail: “It is difficult to underestimate how shell-shocked everyone is by what has happened.

“People are literally reeling from what has happened and some staff would dearly love to publicly rebut some of what has been said about them.

“But the Queen has taken a very measured, sensible approach. She is leading by example. This is a matter for her and the family to deal with.”