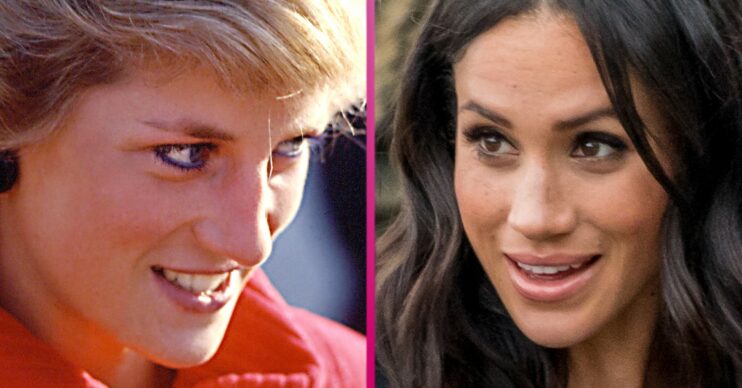 But they would have eventually 'bonded'...

Princess Diana would be “intimidated” by her daughter-in-law, Meghan Markle, a royal biographer claims.

Andrew Morton, who wrote the bestselling book Diana: Her True Story, made the bold claim.

He thinks the late Princess of Wales would have been “taken aback” by the former Suits actress.

However, he does think eventually they would have bonded. Especially over their struggles with mental health.

Writing for The Mirror he said he thinks Diana would have been captivated by Kate Middleton’s initial shyness.

As she too struggled with being in the public eye at first, and took public speaking lessons.

Would Meghan Markle and Princess Diana have gotten along?

Yet for Meghan, she would likely be in awe of her natural strong public speaking skills.

Read more: Princess Diana ‘would have had a stabilising effect on Meghan Markle’

Andrew wrote: “As for Meghan, she would find the energetic American mesmerising and intimidating.

“She would have been taken aback on first meeting Meghan, a force of nature able to speak with passion and precision – and all without notes.”

But he reckons they would have bonded over their mental health battles.

He continued: “But as she got to know her and see the vulnerable side of a woman who suffered mental trauma during her first pregnancy – as did Diana – they would have bonded.”

When is the Princess Diana ceremony?

The royal author’s claims come in anticipation of the Princess Diana statue unveiling this Thursday.

Prince William and Prince Harry will reunite to unveil the new statue at the Sunken Garden at Kensington Palace.

They are expected to deliver individual speeches during the ceremony.

Harry is back in the UK, and is believed to be self-isolating at Frogmore Cottage.

In 2017 the brothers issued a joint statement announcing the commission of the statue.

They said: “It has been 20 years since our mother’s death. And the time is right to recognise her positive impact in the UK and around the world with a permanent statue.

Princess Diana tragically lost her life in a car accident in Paris on August 31, 1997.

This Thursday, July 1, will mark what would have been her 60th birthday.