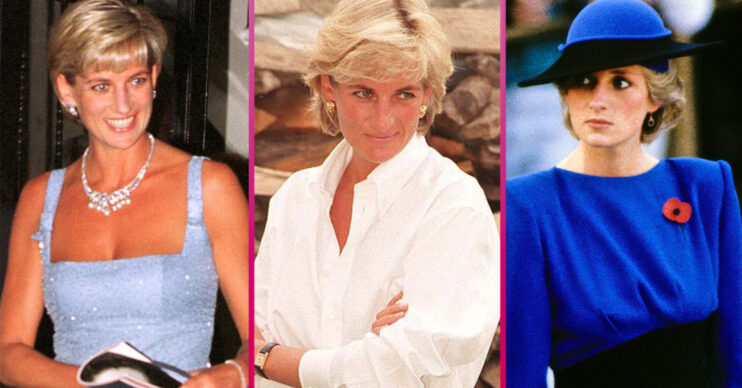 The Princess of Wales was a true style icon

Princess Diana would have celebrated her 60th birthday today and we’re taking a look at her most iconic looks.

The Princess of Wales was a style icon in 80s and 90s right up until her tragic death in August 1997.

Diana looks a vision in her jaw-dropping wedding dress designed by David Emanuel and Elizabeth Emanuel. 1981

In July 1981, Diana married Prince Charles in a ceremony at St Paul’s Cathedral.

Meanwhile, her wedding dress was designed by husband and wife duo, David and Elizabeth Emanuel.

In addition, the gown was an ivory silk taffeta and antique lace gown, with a 25-foot train and a 153-yard tulle veil.

Pretty in pink dress outside Kensington Palace in 1984.

Strikingly sharp, Diana turned heads in her pink blazer in 1985.

Princess Diana continued to impress in yet another blazer as she visited British troops in West Berlin in 1985.

All glitz as glam as Diana stepped out in this off-the-shoulder, sparkly number in 1985.

Understated elegance, Diana’s suit dress was subtly stunning as she listened to a speech by the then First Lady Hillary Clinton in 1996.

Spotted in the crowed, Diana attended a Tea Ceremony during her Tour of Japan looking radiant in 1986.

Along with blazers, dots appear to be another trend Diana was fond of as she stunned in a fitted polka dot white dress at Derby Horse Race in 1986.

Diana looked like she stepped straight off of the silver screens in this strapless baby blue number which she wore to the Cannes Film Festival in 1987.

Casually flawless with Ronald Ferguson at the Polo match in 1987.

12. Princess of the Ball

Diana sizzled at the James Bond premiere in 1987.

13. A true princess in a blue gown

This racy-one-shoulder number gave the royal a sophisticated yet svelte knock-out look in 1988.

If anyone could pull off a dress fashioned after the King it’s the Princess. Designed by Catherine Walker, Diana wowed in this impressive 20,000 pearl-decorated dress in 1989.

This sensational number was worn by the Princess to the When Harry Met Sally film premiere, London, in 1989.

How could one ever tire of Diana in a suit? This quirky, red and yellow number suits the royal to a T in 1990.

Black and White Stripes Princess Diana looked striking in this striped number in 1993.

Christina Stambolian’s LBD is one of the Princess’ most memorable pieces, and marked one of her first outings post-divorce from Prince Charles. 1994

Diana showing of the sportier side of her wardrobe as she leisured at the Chelsea Harbour Gym in 1994.

This little Versace number is everything and more. The figure-hugging purple gown was worn to the Gala Ball at the Field Museum of Natural in 1996.

Laid back and relaxed, Diana rocked this classic 90’s trend effortlessly in 1997.

This delicately embroided floral ensemble was designed by Donald Campbell and was worn as the Prince and Princess embarked on their honeymoon in 1981.

Diana made a statement in this strapless black gown as she stepped out for her first public engagement with Prince Charles at the Royal Opera in 1981.

25. Diana during her engagements

Diana dressed down for a Red Cross visit to an Orthopedic Hospital in Angola in 1997.

Sophistication meets style as the Princess went on a five day trip to America in 1985.

A burst of colour as the People’s Princess vacationed in the South of France in 1997.

With its touch of sequin sparkle Diana looked breath-taking in her black halterneck in 1997.

A look with a bit of bite, Diana showed off her wild side in animal print swimsuit in 1997.

Diana wore a darling spotted number by designer Catherine Walker as she showed off new baby Prince William in 1982.

Never afraid to show a bit of skin, Diana looked tasteful in this one-shoulder blue dress in 1996.

32. Another of Diana’s casual looks

The queen of casual, our Princess always looked fitting whether dressed up or down in 1997.

Beneath this beautiful soft pink, off-the-shoulder dress was a formidable woman.

Diana always did know how to rock a knee-length dress and this simple black pick dressed up with pearls and a thin, white belt is no exception.

The Princess stood out in sequin, strapless dress.

Hats off the royal who looked amazing in yet another blazer sporting a red poppy.

Diana’s stunning blue engagement outfit was only a taste of the iconic looks to come in 1981.

Trend-setter, this two-tone piece was ahead of its time.

The People’s Princess was a picture of elegance as she meets Mother Theresa in 1997.

This lilac suit really is the perfect look. The two-piece ensemble encompasses a staple in the Princess’ wardrobe. The famed blazer in 1997.

Looking wonderous as she attended the Alice in Wonderland Ballet performance in 1996.

Blue glittery dress Diana dazzled in knee-length dress as she attended the Royal Albert Hall in 1997.

White halterneck with sequins. If blazers were the Princess’ sophisticated staple piece, then a halterneck dress is surely a firm fixture in her dress-to-impress bag. In this plunge, white sparkle piece she looked unforgettable in 1997.

A twist on her usual skirt and blazer look, Diana looked chic in the two-piece, pinstripe trouser outfit in 1995.

Just a smattering of polka dots adds the perfect pop of colour to Diana’s cream suit as she attended the Cartier Cup Polo Match with Prince Charles. 1987.

This gorgeous gown creates a stunning waterfall effect on Diana in 1989.

Bold and beautiful, Diana smiled after receiving flowers in captivating red coat in 1989.

Popping out in turquoise polka dots. The knee-length dress is simply gorgeous. 1989

The Princess was dressed to impress in this blue and white skirt suit.

If we’ve learnt anything so far from Diana it’s that you can’t go wrong with a little black dress. 1996

54. Red off the shoulder dress

Diana’s red off-the-shoulder dress was nothing short of sensational in 1990.

Taking to the dance floor with John Travolta, we’re not sure who had Night fever more Diana or Travolta as she dazzled in this black dress in 1985.

Diana carried out royal engagements in red and white button suit in 1985.

The Princess proved mothers can still be fashionable as she cuddled Harry in 1984.

Another suit and guess what? When it comes to style, she nailed it.

A black choker paired with a knee length black dress was the epitome of 90s fashion and no one wore it better than Diana.

How will William and Harry mark Princess Diana’s birthday?

Meanwhile, on Thursday (July 1), Diana’s sons Prince William and Prince Harry unveil a statue to honour what would have been her 60th birthday.

However, they will reportedly make separate speeches during the ceremony.

Read more: Princess Diana fans ‘heartbroken’ over how ‘her death could have been avoided’

Which is your favourite look? Head to our Facebook page @EntertainmentDailyFix and tell us.