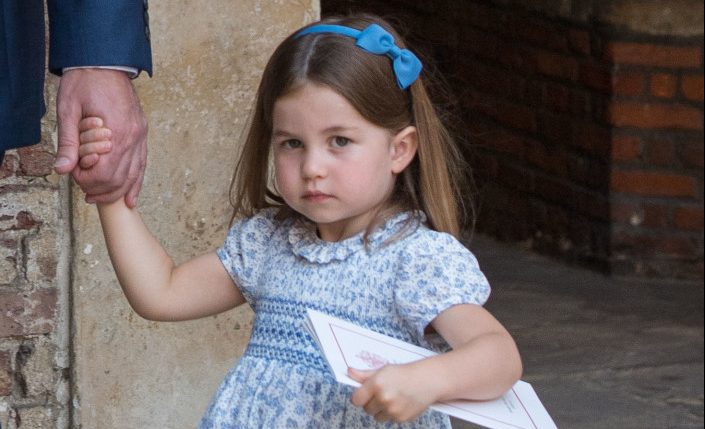 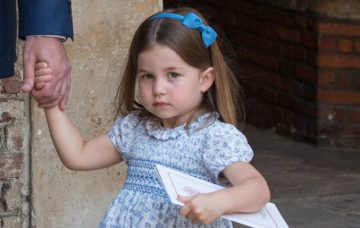 The blink and you'll miss it moment has everyone talking!

Princess Charlotte left royal watchers chuckling when she appeared to issue a stern warning to photographers at her brother’s christening.

The three-year-old was filmed leaving the service at The Chapel Royal, St James’ Palace with her family on Monday.

According to onlookers, the little girl was quick to remind nearby photographers they weren’t invited to the tea party afterwards at Clarence House!

Read more: Duke and Duchess of Cambridge pictured with Prince Louis at his christening

A video clip doing the rounds on social media is a bit hazy, as Charlotte passes behind a pillar and is momentarily obscured from view, but it’s been claimed Charlotte looked at one of the photographers directly and said: “He’s not coming!”

Charlotte then maintained eye contact right until the family disappeared back inside.

Watch the clip, posted by ITV News Royal Editor Chris Ship, and see if you can catch the moment yourself:

"He's not coming" Princess Charlotte said looking at the cameras as she left Prince Louis’ #RoyalChristening. She clearly wasn't up for sharing any of her little brothers' cake at the after-party (even if it was a 7-year old tier from Mum & Dad’s wedding) 🎂 pic.twitter.com/bnzou9If61

After the christening of Prince Louis on Monday afternoon, The Duke and Duchess of Cambridge held a private tea party for their family and close friends at Clarence House.

The cute moment has gone down a storm with royal fans, many of whom took to social media to lavish praise on Charlotte.

Princess Charlotte has so much sass. Telling photographers outside Louis' christening "you're not coming" has got me howling!

Love the look on Prince Williams face when Charlotte says "you're not coming" to the photographers at the christening, he's trying not to crack up and she is so serious about it. #bless

Of course, it’s not the first time she’s stolen the show with her confidence.

She elicited a chorus of “awws” back in April when she turned around and gave a wave to the cameras as she visited newborn brother Louis in hospital after his birth.

Monday’s christening was the first time the Cambridge family have been seen as a family of five.

Kate, The Duchess of Cambridge, was pictured carrying 11-week-old Louis, while William, The Duke of Cambridge, held the hands of Charlotte and her four-year-old brother George.

They were joined at the service by William’s father, The Prince of Wales, and Camilla, The Duchess of Cornwall, as well as newlyweds The Duke and Duchess of Sussex.

Prince Louis wore a handmade replica of the Royal Christening Robe, made by The Queen’s dressmaker, Angela Kelly.

Justin Welby, The Archbishop of Canterbury, was chosen to conduct proceedings, and said earlier: “I’m delighted and privileged to be christening Prince Louis today – a precious child made in God’s image, just as we all are. Please join me in praying for him and his family on this special day.”

The Queen, 92, and her 97-year-old husband Prince Philip were not among the well-wishers, with Buckingham Palace saying it was a decision made “some time ago” and not related to any health issues.

All six of Louis’ godparents and their spouses were, obviously, invited.

Prince Louis is fifth in line to the throne.

Do you enjoy seeing pictures of the Cambridge family? Leave us a comment on our Facebook page @EntertainmentDailyFix and let us know what you think!