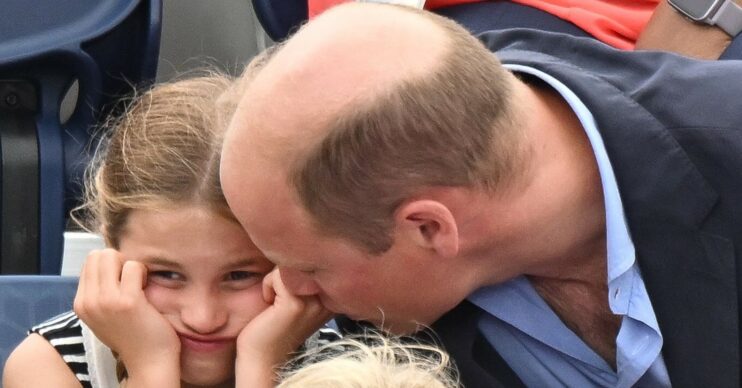 Prince William melted the hearts of royal fans after he was seen doting on Princess Charlotte in news coverage from earlier this week.

Fans lapped up the young royal’s animated antics as she pulled a series of very expressive faces from the stands.

But the attention lavished by William on Charlotte also proved a hit – with Twitter users dubbing her a “Daddy’s girl”.

Charlotte seemed thrilled to take in the swimming as a spectator with her parents.

She also enthusiastically greeted officials when invited to do so by her proud father.

However, it may be the event wearied Charlotte as at one point she appeared to become more restless.

Nonetheless, observers were impressed with how William tenderly regarded his second child, praising him for his devotion.

He was seen reassuring Charlotte with cuddles and as he tucked her hair behind her ears.

Excited fans expressed on social media how touched they were by the signs of the bond between dad and daughter.

One person tweeted: “Prince William is such a proud dad!”

A second cooed: “Love this natural interaction of Papa and daughter.”

And a third gushed: “Such tenderness.”

Other Twitters users claimed the images exemplified how close William and Charlotte are.

William is so proud. They way he looks at Charlotte adoringly.

Another added: “William is so proud. They way he looks at Charlotte adoringly.”

And someone else speculated: “I’ve thought that she’s a ‘daddy’s girl’ for the longest. That’s not to ignore Mama, of course, but Charlotte and William have this special relationship all their own.”

Meanwhile, Kate was also hailed for spending time with her daughter.

One person posted: “I love how William and Catherine took just Charlotte with them today. You could see their pride which just made you melt. I’m sure that today was so special for Charlotte.”

And one fan even went as far to suggest they could feel a connection between Charlotte and her late grandmother.

“I feel like it’s not only William, but Princess Diana looking at Charlotte with such happiness and pride,” they wrote.