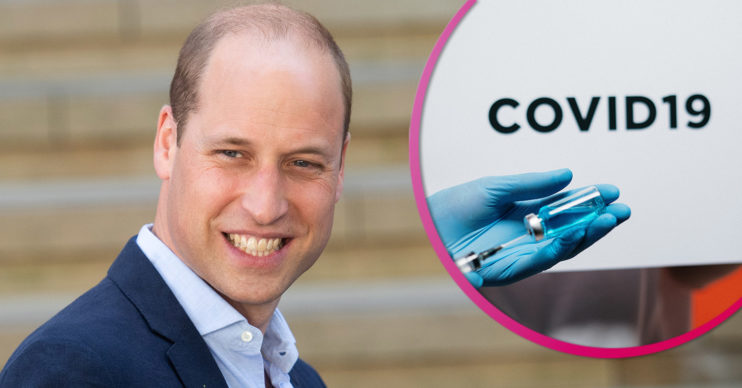 "Look at them guns"

Prince William has had his first dose of the Covid vaccine as he thanked all those working on the rollout.

The Duke of Cambridge was pictured having the jab on the Kensington Royal social media pages.

The image showed William, 38, with his jumper rolled up as a health expert administered the vaccine.

William said: “On Tuesday I received my first dose of the COVID-19 vaccine.

Read more: William and Kate ‘closer than ever’ and ‘genuinely happy’, expert reveals

“To all those working on the vaccine rollout – thank you for everything you’ve done and continue to do.”

Fans praised the Duke for showing himself having the vaccine, but others were distracted by his muscles!

William’s guns were the focus in the comment section, with many stunned at how ripped the Duke was.

One person commented: “Prince William has some guns…”

No wonder The Duchess of Cambridge looks always so happy.

Another said: “Look at them guns.”

A third gushed: “Those biceps though….”

Another quipped: “No wonder The Duchess of Cambridge looks always so happy.”

Meanwhile, it’s unclear whether Kate Middleton, 39, has had the vaccine yet.

William’s grandmother the Queen and late grandfather Prince Philip had their vaccines back in January.

Royal fans praised William for showing himself having the vaccine.

One commented: “Yay! Jolly good example for the refusers!”

Another wrote: “Thank you for being a role model for the important vaccination campaign.”

One said: “Setting such a good example and strong message to everyone in the UK. Thank you.”

Meanwhile, last month, royal fans were left gushing as new photos of Kate and William were released to mark their 10th wedding anniversary.

More recently, an expert said the couple are ‘closer than ever’ and genuinely happy at recent events.

Duncan Larcombe told The Mirror: “What we’re seeing with Kate and William is just how genuinely comfortable and happy they are together.

“They really look as though everything that has happened in the past year has only pushed them closer together. They’re closer than ever.”