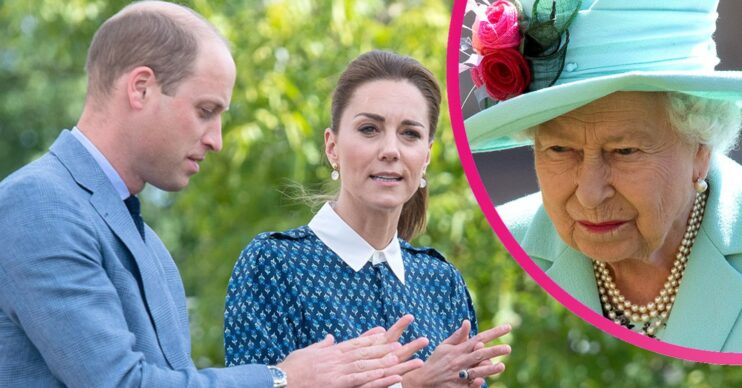 A move closer to Windsor Castle may be imminent...

In Prince William and Kate Middleton latest news, the Duke and Duchess of Cambridge are reportedly considering a move to be nearer to the Queen.

William and Kate, 39, are apparently keen to live much closer to Her Majesty, 95.

Since the pandemic, the Queen has been forced to base herself around Windsor Castle.

Moving from her typical Buckingham Palace location, she and the late Prince Philip relocated to Windsor last year.

Are Kate and William moving house?

And now William and Kate are reportedly seriously looking into moving their own family closer to Windsor.

They usually live between Kensington Palace and Anmer Hall in Norfolk.

Anmer was gifted to the Duke and Duchess by the Queen as a wedding present.

For years it has provided a country escape for the pair and their three young children – Prince George, Princess Charlotte and Prince Louis.

But an insider source told the Mail on Sunday that the location no longer suits the family.

As not only is the Queen rarely at Sandringham Estate these days, but the children attend school in London.

Based in Battersea, South London, it is an easy commute from the Windsor region.

‘Windsor is a perfect compromise’

The source said: “Anmer Hall made sense while William was a helicopter pilot in East Anglia and it was useful for Christmases at Sandringham, but it doesn’t really work any more.

“It’s a little too far away for weekends, but Windsor is a perfect compromise. They are eyeing up options in the area.”

What’s more, a base closer to London will benefit their royal duties.

Since Prince Harry, Meghan Markle and Prince Andrew have ceased to be Senior Royals, they’ve been in more demand than ever before.

So as their responsibilities increase, it certainly makes sense for them to have a more centrally located permanent residence.

And according to the Mail On Sunday article, Fort Belvedere is under consideration.

This is a Grade II listed home that is located to the south of Windsor Great Park.

King Edward VIII, who abdicated in 1936, once resided here.

Although currently occupied by the Weston family, it is leased to them via the Crown Estate.

And the family are said to be close family friends of the Duke and Duchess of Cambridge.