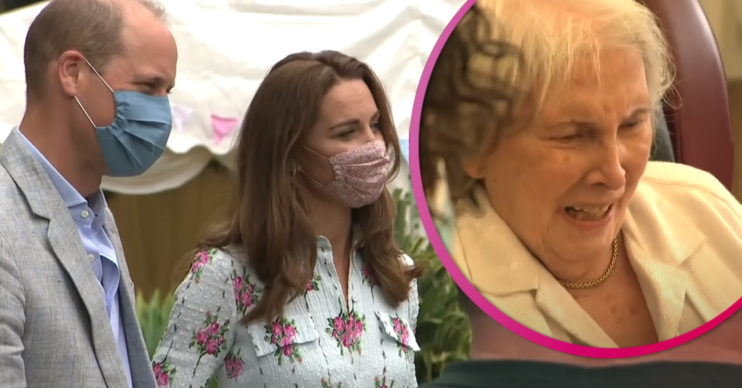 Prince William was left in hysterics as a care home resident swore at him during a royal visit.

Back in May, the Duke of Cambridge and his wife Kate Middleton hosted a bingo game via video call for the residents at Shire Hall Care Home in Cardiff.

However, they were told their bingo lingo wasn’t quite up the scratch.

On Wednesday (August 5), the couple revisited the care home in person after easing of lockdown restrictions and came up against 87-year-old Joan Drew Smith.

Read more: Kate Middleton and Prince William divide fans as they play in arcade during visit to Barry Island

Earlier this year, Joan won the bingo game but told William and Kate it “wasn’t as good as it should have been”.

Yesterday, William told Joan: “Hello Joan, do you remember we did the bingo with you? You said we weren’t very good!”

What did Joan say to Prince William?

Joan replied: “Yes. You did a bloody [expletive] job.”

Kate and William burst into laughter along with the care home workers.

Meanwhile, the couple also spoke to fellow resident Margaret Stocks, 95, who was another winner of the virtual game.

She told them: “I did enjoy it. I hadn’t played it before.”

Kate said: “Neither had we! That’s why we were so bad!”

We enjoyed it just as much as you did.

William added: “We enjoyed it just as much as you did. It was a new experience for us.”

During the visit, Kate and William both wore masks but admitted it was difficult to hear others.

William told Joan: “We have to wear masks because of the virus, but it’s difficult to hear sometimes when you can’t see someone’s mouth.”

Pointing at Kate, Joan asked William: “Is that your assistant?”

Laughing, Kate said: “Well I am your assistant. I have been for a long time!” as she put her hand on William’s shoulder.

They started their tour with a visit to an amusement arcade where they went on some of the machines.

The couple spoke to the owners of local businesses about the impact of coronavirus on tourism.

They later visited Marco’s cafe, which has been made famous by the TV series Gavin and Stacey.