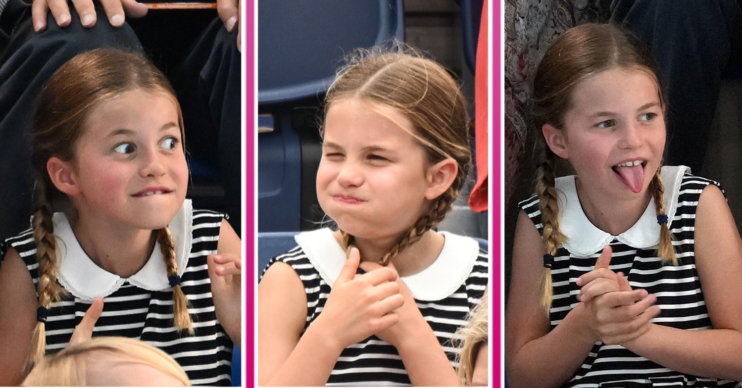 Princess Charlotte joins Will and Kate at the Commonwealth Games and she’s loving life!

Charlotte seemed to be a big fan of the swimming

Prince William and Kate Middleton were at the Commonwealth Games today, and to much surprise, were joined by their daughter, Princess Charlotte.

Charlotte was at the Games to watch the swimming, and royal fans were delighted – not least with all the faces she was pulling!

She certainly gave little brother Prince Louis a run for his money with her animated antics!

Today saw Prince William and Kate make an appearance at the Commonwealth Games in Birmingham.

The royal couple was in attendance to watch the swimming at Sandwell Aquatics Centre this morning.

However, in a pleasant surprise, they were joined by their daughter, Princess Charlotte.

The little princess wore a black and white striped dress and had her hair in pigtails.

The princess was very animated while watching the swimming today, pulling a number of funny faces during the races.

Charlotte was snapped sticking her tongue out, grimacing, and pouting at different points throughout the races, emulating her younger brother’s performance at the Jubilee in June.

At one point, the seven-year-old turned and gave her father a cheeky thumbs up too, drawing a laugh from her parents.

She was also seen engrossed in what appeared to be a programme for the day and shaking hands with officials at the Games.

And at one point she seemed a little disheartened, pulling a glum face and getting some soothing words from her doting dad.

“She is just super adorable. Wish Prince Louis came also,” another then said.

Very sweet picture of The Duke and Duchess of Cambridge with Princess Charlotte during their trip to SportsAid House for the #CommonwealthGames2022 in Birmingham. Catherine became the Patron of SportsAid in 2013 📸 @ChrisJack_Getty 👑 #DukeandDuchessofCambridge #PrincessCharlotte pic.twitter.com/8QUeuYWLMP

Additionally, another tweeted saying: “Absolutely wonderful to see The Cambridges. A dotting dad, a proud wife, and a charming daughter.”

“It’s so good to see Princess Charlotte with her parents at The Commonwealth Games today!” another said.

Cambridge’s at the Commonwealth Games

The Duke and Duchess of Cambridge also promoted their trip to the Commonwealth Games on Instagram today.

The royal couple uploaded two posts to their story for their 13.9 million followers to see earlier today.

In the first, the Cambridge’s wrote on a purple background: “Will see you soon, Birmingham!”

“Looking forward to an exciting day of sport at @birminghamcg2022,” they then said.

In the second post on their story, the Cambridge’s uploaded a picture of themselves and Charlotte meeting Perry, the Commonwealth Games’ mascot.

Below that was a picture of swimmers diving into the pool. “Hi Perry,” they captioned the post.

Charlotte’s trip to watch the games comes just days after she and William sent the Lionesses‘ a video message prior to their Euro 2022 final.