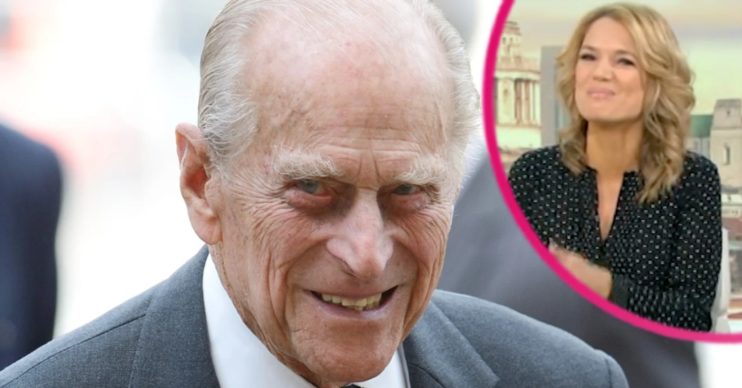 She met the Duke of Edinburgh in 1983

Prince Philip previously told Charlotte Hawkins to “move out of the way” as a young child.

Speaking to co-presenter Ben Shephard, she explained she met the Queen and her husband when she was 10 years old.

During the event, Charlotte was left awestruck to be in the company of the royal couple.

Meanwhile, at one point, Philip put his hand on her shoulder to tell her something.

But it appeared she was actually in the way of the Queen, as he instructed her to “move over”.

I was completely awestruck that he was speaking to me

Charlotte explained: “I met him back when I was 10 years old in 1983. I was picked to hand out a bouquet of flowers to the Queen at the Maundy service.”

In addition, she said: “I am one of those children in there, anyway, that’s me and my ear is sticking out, which obviously delighted me in all the official photos.

“And the lovely thing is, you look at that photo there and the Duke of Edinburgh actually put his hand on my shoulder to speak to me.

“I was completely awestruck that he was speaking to me.”

However, Charlotte was actually “blocking” the Queen.

The presenter added: “But the words he uttered were, ‘You’re going to need to move to the side because you’re in danger of blocking the Queen’.”

When is Prince Philip’s funeral?

Meanwhile, Charlotte’s story comes one day before the funeral of Prince Philip.

His funeral is due to take place tomorrow (April 17).

It will start at 3pm at St George’s Chapel in the grounds of Windsor Castle.

30 guests will attend the funeral due to Covid regulations.

In addition, Her Majesty – accompanied by a lady in waiting – will follow her husband’s funeral procession in her official Bentley.

Read more: Prince Charles and Camilla step out to view flowers and tributes to Prince Philip

The attendants include Prince Charles, Prince Andrew, Princess Anne and Prince Edward and their respective spouses.

All of the duke’s grandchildren and their respective spouses will attend as well as the Queen’s first cousins, the children of the Queen’s sister Princess Margaret, and three of Philip’s German relatives.

In addition, close friend of the Duke, Countess Mountbatten of Burma, is invited.