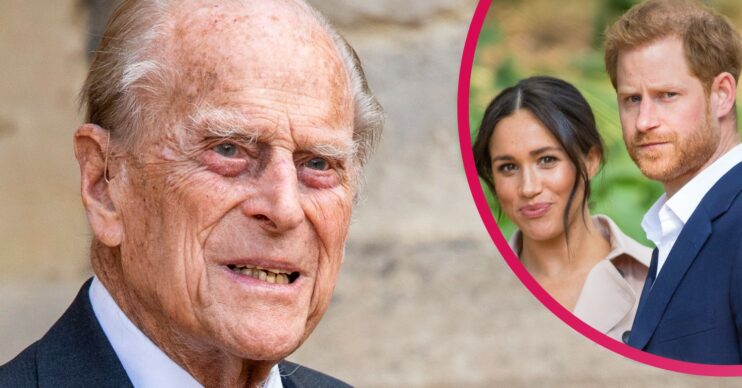 Harry and Meghan stepped back from duties in 2020

Prince Philip was reportedly “hurt” when Prince Harry and Meghan Markle stepped down from royal life, an expert once claimed.

The Duke and Duchess of Sussex announced their decision to quit their senior royal roles in January 2020.

They officially stepped down in March of that year.

However, royal author Christopher Andersen claimed that the Duke of Edinburgh was not happy about the couple’s decision.

Prince Philip ‘not happy’ over Harry and Meghan’s royal decision

Mr Andersen, author of Brothers and Wives: Inside the Private Lives of William, said Philip wasn’t impressed that Harry and Meghan announced the news on Instagram.

In it, they confirmed they would stepping down from their senior royal roles to become “financially independent”.

In Mr Andersen’s book, a royal aide claimed that Philip was “furious, deeply hurt, spitting blood” over the decision.

In addition, according to the aide, the Duke of Edinburgh shouted “this shows a complete lack of respect” as he expressed his anger to the Queen.

Meanwhile, Philip reportedly told one of his closest aides: “It appears as if, we were wrong about her all along.”

It comes after news that Harry won’t be attending a memorial service for his grandfather this month.

Prince Philip died last April at the age of 99.

On March 29, a memorial service will take place for the Duke of Edinburgh.

Members of the Royal Family will attend.

However, a spokesperson for Harry said: “The Duke will not be returning to the UK in late March, but hopes to visit his grandmother as soon as possible.”

Do you think Harry should attend the memorial service? Tell us on our Facebook page @EntertainmentDailyFix.