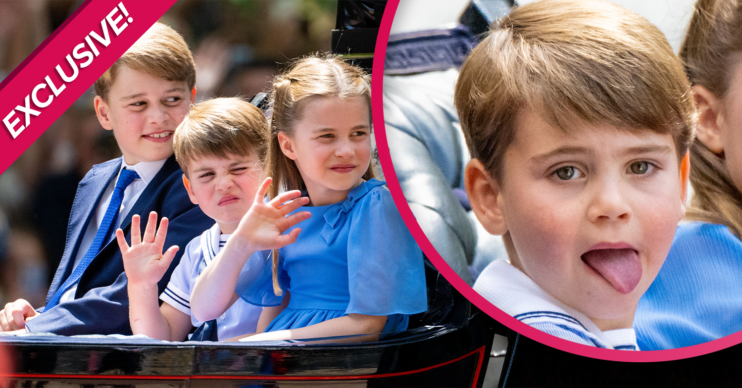 He was the star of the show this weekend!

Prince Louis and his cheeky behaviour at the Platinum Jubilee celebrations caught the eye of many royal fans.

Even his parents William and Kate joked about it!

Louis was then seen on the Buckingham Palace balcony, chatting to the Queen and pulling faces as the flypast took place overhead.

He rounded out the Platinum Jubilee at the Pageant, where he was seen being naughty for Kate before getting a telling off from Mike Tindall.

Little Louis, who is four years old, “tried so hard” to sit still, one expert told us. However, hilariously it just wasn’t to be.

Stephanie explained: “Louis is an active four-year-old boy with an outgoing personalty.

“The requirements of the whole four-day event clashed with the natural position of where that little boy is in his life right now.

“Sitting still for hours is not what he does and he tried so hard!” she laughed.

Stephanie doesn’t think mum Kate has her hand full at home. Although she admits Louis is “obviously different” to elder brother Prince George.

He is also the third child, so maybe he also ensures that he is heard at times.

“He is obviously different to George, as is every child to their sibling, even to a twin sibling.  She will handle them each as individuals,” Stephenie said.

‘He ensures that he is heard’

She then explained: “If you have a lively young child then normally one wouldn’t put them in a situation where you as the parents are going to spend then whole time having to try to manage their behaviour.

Read more: Who’s who in the cast of Coronation Street? Meet the full 2022 line-up here

“If you go to a restaurant you choose a child-friendly one, sit down, take some activities and toys to occupy, eat and then head off out of there.

“You are not about to sit and eat a three-course meal which might take a couple of hours with a four year old.

“He is also the third child, so maybe he also ensures that he is heard at times,” she commented.

Royal roles for the future

Stephanie doesn’t think the experience will have put Kate and husband Prince William off of involving Louis in royal engagements going forward.

“They are gradually being involved to educate them in the expectation of a royal child.

“I also think they will be taken to meet the general public when one of their parents does a quiet, discreet visit so that is not just the big events.

“It is meeting real people like you and me, similar as to what happened in Cardiff.

“They need to understand what their parents’ ‘job’ entails from all angles.”

As the trio gets older, Stephanie told us she is looking forward to watching them develop.

“As they get older they will be learning who they are to become really, to take their place with the family, their role and we will watch their little personalties develop and shine,” she concluded.