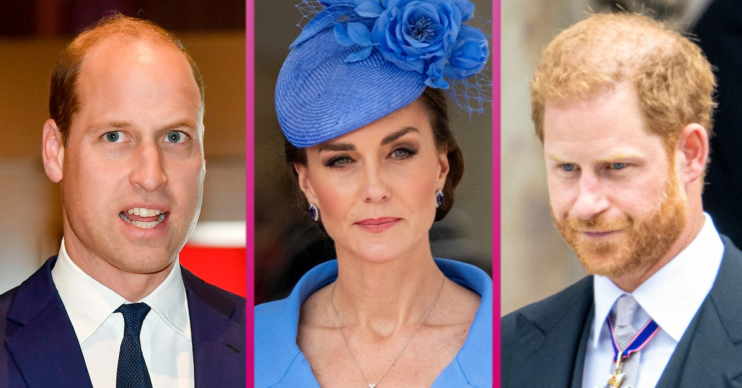 Prince Harry ‘urged’ to ‘build bridges’ with William on his birthday by Kate, sources claim

She's reportedly on a mission to heal William and Harry's rift

Prince Harry has reportedly been “urged” to “build bridges” with Prince William on his birthday by Kate Middleton, sources claim.

The Duke of Cambridge turns 40 today – and Kate reportedly believes it isn’t too late for the brothers to mend their relationship.

It’s been reported Will and Kate will spend the day with their children and a few close friends.

However, while it is meant to be a happy occasion, Kate is reportedly heartbroken that Prince Harry won’t be there to celebrate with William.

She’s quietly sent a message that it would mean so much to William if his little brother made some type of contact on his special day.

Harry and William attended some of the same events at the Jubilee. However, they failed to acknowledge each other in public.

Now, according to royal insider, Kate has secretly reached out to Harry in an attempt to mend his and William’s relationship.

A royal source spoke to Closer about Kate’s feelings regarding William and Harry’s rift.

They claimed Kate thinks it’s “incredibly sad” how the once-close brothers have little to do with each other now.

They then went on to claim Kate is “heartbroken” at how things have turned out between them.

“She’s quietly sent a message that it would mean so much to William if his little brother made some type of contact on his special day. A message would go a long way to break the ice and help build bridges without anyone else in the way.”

They continued, saying: “Kate’s a wonderful diplomat and an eternal optimist. It’s her firm belief that one day Harry will snap out of his trance and be his own man.”

The royal source continued, saying that if Kate could melt the ice between the brothers, it would be an incredible present for William.

Since quitting his life as a working royal, Harry has only visited the UK on a handful of occasions.

This has led to Kate reportedly no longer “recognising” the brother-in-law she once knew.

“The sad truth is that Kate has struggled to recognise Harry as the same person she loved and respected all those years. The same goes for William, who desperately misses his brother,” the source alleged.

The source continued, saying that Kate is reportedly concerned about the pain is causing her husband.

They went on to say that she is “urging” Harry to “find it in his heart” to sort things out with his brother.