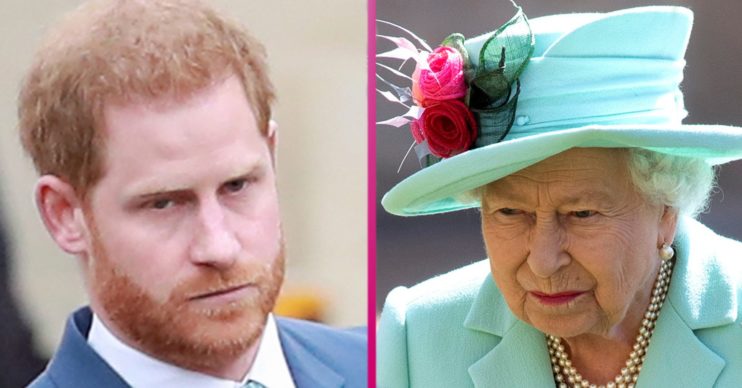 Prince Harry is said to be upset that he can’t visit The Queen due to COVID.

Harry, 35, is holed up at his new mansion in Montecito, California with his wife Meghan Markle, 39, and son Archie, one, instead.

The Queen is currently at her beloved summer residency, Balmoral, with Prince Philip.

Here they were believed to have been joined by Prince William, Kate Middleton and their three children over the weekend.

Harry, Patron of the Rugby Football League, spoke to its players, coaches and members on a video call over the weekend.

Here he said he’d hoped to have returned to the UK. But the strict quarantine requirements have prevented him so far.

He said: “We’ve got a whole Rugby League World Cup coming next year, so I definitely plan on coming back. I would have been back already had it not been for COVID.”

However, a source told In Touch Weekly that Meghan isn’t on the same page.

The source says that Meghan is “too busy” redecorating their home to worry about the UK.

An insider claimed: “[She] doesn’t feel like she’s missing out.

“She’s been too busy decorating their new Montecito mansion.”

This will be the second year in a row they have skipped visiting Balmoral.

Last year they claimed Archie, four months at the time, was too young to make the trip.

During this period Meghan flew out solo to New York to support her friend Serena Williams at the US Open.

As for Meghan and Harry’s new home, it is a far cry from their humble apartment at Kensington Palace.

It even outdoes their Windsor Castle Frogmore Cottage for which they had £2.4 million renovations.

Sprawling over some seven acres, their new American house has nine bedrooms and a whopping 16 bathrooms.

And that’s just inside. Outside boasts a huge swimming pool, tennis court and a children’s play area.