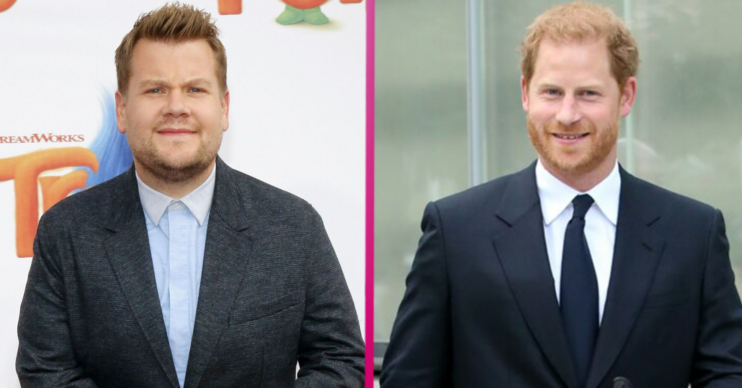 Prince Harry to take over from James Corden as host of The Late Late Show to plug book?

Prince Harry could take over from James Corden as host of The Late Late Show, one expert has claimed.

Of course, Harry lives in California with wife Meghan Markle and kids Archie and Lilibet.

And he’s no stranger to the show, having appeared on it alongside James in the past.

However, could he be about to swap a guest appearance with hosting duties?

One royal expert appears to think so!

Royal commentator Neil Sean has claimed Harry is considering taking over from host James Corden to “sell his book”.

Of course, the flame-haired dad-of-two is releasing a tell-all autobiography next year.

And, Sean says he’ll need to do something drastic to shift some copies.

As a result, he told The Express: “One of the ideas that they’re floating around over at CBS is the fact that Prince Harry, for one night only, could simply take over The Late Late Show which is hosted by James Corden.

“When you think about it does make perfect sense simply because they’re good chums and, of course, it would be a great way for Prince Harry to sell that book directly to the American public.”

He also gave an insight into what the show could look like, with “skits and jokes” being filmed for the late-night talk show.

And, Sean added that while some may scoff at the idea and say it’ll never happen, he thinks it just might.

He added: “Let’s not forget he does have to do something to sell the book. It can’t be all serious, they need to be able to show a fun side. At this stage it’s very early days but this has happened.”

What happened when Harry was on The Late Late Show before?

Of course, Harry has appeared on the show before.

He filmed a segment with James back in February and was seeing enjoying tea on an open-top bus and having a FaceTime call with wife Meghan.