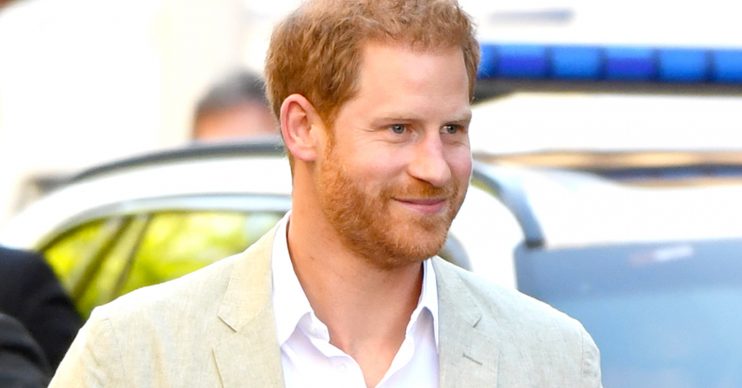 The short video, posted today (09.10.19) from the Sussexes’ official Instagram account, shows Ed approaching a door and ringing a bell that chimes with a string of telltale notes from the royal anthem God Save The Queen.

The door then opens and Prince Harry is standing on the other side. He smiles as Ed greets him with “Hi mate, how are you doing?” and replies, grinning: “It’s like looking in a mirror”.

Harry steps aside and gestures for Ed to follow him and the singer asks: “Do you mind if I bring the camera in?”

The account’s followers rushed to comment on the hilarious clip, which was captioned, “Coming soon…” and included the hashtag #WMHD, which stands for World Mental Health Day.

Many couldn’t believe that Harry would actually have God Save The Queen as his doorbell tune, with one follower commenting: “That door bell.”

Another wrote: “As if that’s the actual door bell. No way.”

A third said, alongside a string of laughing-crying emojis: “Is that actually their doorbell ring…”

Others were excited to see more of Ed and Harry’s collaboration, which the clip revealed would land on Thursday (10.10.2019).

Someone put: “Oh brilliant, two of my favourite gingers!. And I mean that in a loving and endearing way. Can’t wait!”

Others thought that the property featured in the video was the Sussexes’ Frogmore Cottage home, but according to a report in Hello! magazine, it’s Princess Eugenie’s Kensington Palace cottage.

It follows a recent project that saw Harry and his wife the Duchess of Sussex, Meghan Markle, team up with their fellow royals the Duke and Duchess of Cambridge.

Their voices were used in a TV advert promoting the NHS’ Every Mind Matters campaign, which is looking to tackle Britain’s mental health issues.

Aired on Monday (07.10.19) across ITV, Channel 4, Five and Sky, the ad featured Meghan, Harry, William and Kate speaking about the ways Every Mind Matters can help improve people’s mental health.

William narrated: “Everyone knows that feeling, when life gets on top of us. All over the country, millions of us face challenges to our mental health – at all ages – at all intensities, and for all sorts of reasons.

“We feel stressed, low, anxious, or have trouble sleeping. Me, you…”

Harry continued in the ad, which also featured the likes of TV presenter Davina McCall and GBBO star Nadiya Hussain: “…your brother, your mother, your colleague, or your neighbour. Waiting, wondering, hoping, hurting.”