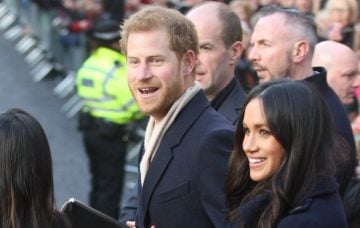 Prince Harry made reference to fiancée Meghan Markle while delivering a speech in London on Monday.

The royal spoke at the Commonwealth Heads of Government Meeting after being appointed a Commonwealth Youth Ambassador by his grandmother, The Queen.

Harry, 33, told the audience that both he and Meghan will be involved in the scheme.

He said: “In my new role, I will work to support the Queen, my father the Prince of Wales, and my brother William, all of whom know that young people are the answer to the challenges of today.

“I am also incredibly grateful that the woman I am about to marry, Meghan, will be joining me in this work, of which she too is hugely excited to take part in.”

There were cheers and whoops from the audience when Harry mentioned Meghan’s name, which made him look up from his speech notes and smile.

Since meeting Harry and becoming engaged last year, the American has quit her role in US TV drama Suits and retired from acting, in order to focus on her position as a senior member of the royal family.

Following the wedding next month, it’s been predicted Harry and Meghan will tour the Commonwealth.

If they do, it will mark Meghan’s first string of overseas engagements, after carrying out several engagements in the UK with Harry.

The couple hinted at plans to tour the Commonwealth in their engagement interview with BBC News, which detailed Meghan’s charity work over the years which has included serving as a UN Women’s Goodwill Ambassador.

She said: “I think what’s been really exciting is the causes that have been very important to me, I can focus even more energy on.

“I’m excited to just really get to know more about the different communities here, smaller organisations working on the same causes that I’ve always been passionate about under this umbrella.

“And also being able to go around the Commonwealth, I think, is just the beginning of that.”

Meanwhile, Harry also spoke in his speech about how much he admires his grandmother and her service to the Commonwealth over the years.

According to the Daily Mail, he told the audience: “When I was reflecting on how to make the biggest impact with this new role, I turned to the ultimate source of guidance on all things Commonwealth: the words of The Queen herself.

“On the day of her 21st birthday, the then-Princess Elizabeth gave an extraordinary radio address from Cape Town. With an eye on the future, and an already unflinching sense of duty, she made a commitment. She said that whether her life be long or short, it would be dedicated to the service of the people of The Commonwealth.

“All of us here today can be grateful that it is a long life The Queen is still enjoying. Her Majesty’s commitment has meant that The Commonwealth is a thriving family of nations, a common link between nearly two and a half billion people, and a defender of democracy, justice, and peace.

“I believe firmly that central to The Queen’s success in supporting The Commonwealth has been her constant focus on not just the Prime Ministers and Presidents of member nations, but of the people themselves.”

Will you be watching the royal wedding? Leave us a comment on our Facebook page @EntertainmentDailyFix and let us know what you think!