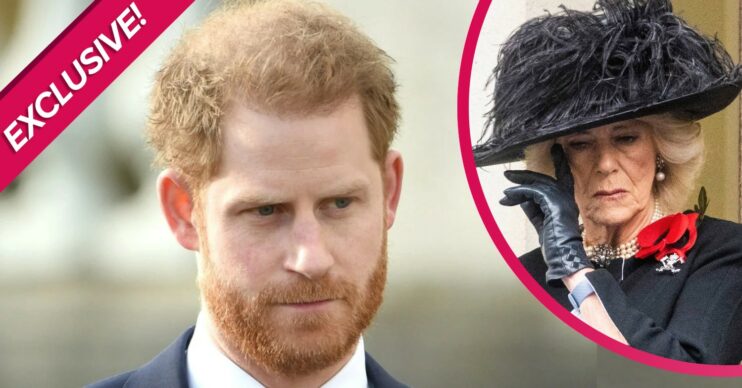 In the latest Prince Harry news, an expert has claimed that aides are “concerned” over the way he may depict Camilla in his memoir.

The Duke of Sussex is set to release a book on the “highs and lows, the mistakes and the lessons he’s learnt” later this year.

But what does he have to say about Camilla, the future Queen Consort?

It comes after the Queen expressed her wish for the Duchess of Cornwall to be named ‘Queen Consort’ following her reign.

And while Harry is yet to speak out on the matter, Charles says that there is some “concern” when it comes to Camilla.

He told us: “Remarkably neither he nor Meghan [Markle] have made any public statement congratulating the Queen on her Platinum Jubilee. If he or they have sent a private message, obviously it has not been revealed.

There is some concern…

“But there is some concern that this memoir that Harry is writing may not paint Camilla in a good light. That is certainly a concern among some royal aides, so we shall have to see how it pans out.”

Charles also pointed out that Harry had “no say” in the Queen’s decision.

The expert added: “He really has no say in the matter.”

What does Prince William think?

The Duke of Cambridge and his wife Kate Middleton have grown close to Camilla over the years.

Commenting on their bond, Charles shared: “I think the relationship between Camilla, William and Catherine has got stronger.

“It’s hard to tell with Harry and Meghan as they quit the family. I think it is always difficult to accept a new spouse into a parent’s life, but I have not heard that there were any major or minor problems with the boys and Camilla.

“Their parents were divorced and I think the boys were happy to see their father happy again.”

He continued: “Camilla is an integral member of the royal family now and both boys are grown up adults. She is hardly the wicked step mother.”

The Queen recently revealed her wish for Camilla to become ‘Queen Consort’ when her son is King.

Her statement read: “I would like to express my thanks to you all for your support. I remain eternally grateful for, and humbled by, the loyalty and affection that you continue to give me.