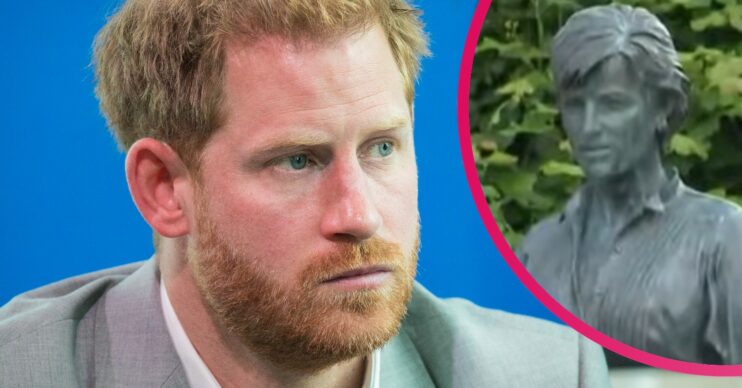 He was rather more enthusiastic than William, it appears

In the latest Prince Harry news a lipreader has ‘revealed’ the Duke of Sussex‘s immediate reaction to the Princess Diana statue.

Prince Harry and Prince William reunited on Thursday, July 1, to unveil a new statue dedicated to their late mother.

Reunited at the Sunken Garden at Kensington garden, the brothers unveiled the giant grey statue.

Depicting Princess Diana with three children, it was designed by Ian Rank-Broadley.

Kensington Palace said the statue is designed to reflect her “warmth, elegance and energy”.

What did Prince Harry say about the statue?

According to lipreader Jeremy Freeman, The Duke of Cambridge was immediately in awe of the statue.

Prince William then said: “What a reveal. Okay. Okay.”

And Harry added: “Amazing…This is spectacular.”

However, this seems to be the extent of their short-lived conversation.

In fact, after a bit of mingling with the guests, Prince Harry is said to have left after just one drink.

Where is Prince Harry now?

Harry is believed to already be back in America now with his wife Meghan Markle and their two children – Archie and Lilibet.

It was initially expected that both brothers would deliver speeches at the event.

But neither did, instead it was a decidedly low-key affair.

The day marked what would have been the Princess of Wales’ 60th birthday.

In addition to those involved in the statue’s creation, Diana’s siblings also attended the event.

This is the first time Harry has been in the UK since he attended his late grandfather Prince Philip’s funeral in April.

What has Prince Harry said about his family?

This all comes amid him making various negative accusations against his family.

He has accused them of racism and of failing to provide adequate protection for his wife Meghan.

He’s also said that he believes his father, Prince Charles, and brother William are “trapped” within the The Firm.

Finally, while speaking to actor Dax Shepard he said that he hoped to escape the “cycle of pain” for his own children.

He said that he believed generations of trauma had essentially been passed down to him.

The Duke claimed on Dax’s podcast: “I don’t think we should be pointing the finger or blaming anybody, but certainly when it comes to parenting, if I’ve experienced some form of pain or suffering because of the pain or suffering that perhaps my father or my parents had suffered, I’m going to make sure I break that cycle so that I don’t pass it on, basically.

“It’s a lot of genetic pain and suffering that gets passed on.

“I started to piece it together and go ‘okay, so this is where he went to school, this is what happened, I know this about his life, I also know that is connected to his parents so that means he’s treated me the way he was treated, so how can I change that for my own kids?'”